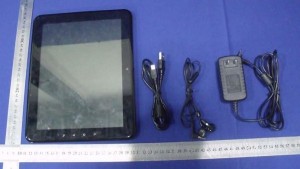 MSI is prepping its own budget-class 10-inch Android tablet and the device was most recently seen going through the FCC, though little is known about pricing or release. The 10-inch slate would only maintain a paltry WVGA 480 X 800 resolution, which is found on today’s smartphones, rather than the higher resolution 1080 X 600 of 7-inch slates or the 1280 X 800 resolution of 10-inch Honeycomb tablets on the market today. The Enjoy 10 would also run Android 2.3 Gingerbread rather than Android Honeycomb, and the device will be powered by a single-core 1 GHz ARM Cortex A8 processor rather than the dual-core chipsets found on many Honeycomb tablets. A full-sized SD card will also be on-board for storage.

The Enjoy 10 will also have WiFi and Bluetooth. The device would complement the Enjoy 7, a budget 7-inch slate.

U.S. availability and release is unknown at this time, but for this tablet to succeed in the marketplace, MSI would have to undercut the $400 price point of rival dual-core Honeycomb offerings from Acer and Asus.