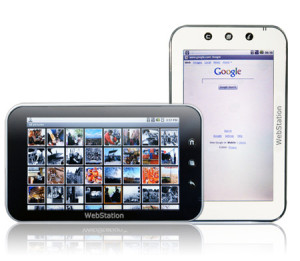 Engadget reports the Camangi WebStation, a tablet device running Android on a 7″ screen, will supposedly ship early next month, pointing to an announcement on Camangi’s WebStation website. Based on the YouTube demo, it looks like a nifty entertainment device. But the website does not exactly scream confidence.

Thanks for your highly interest in Camangi WebStation. We’ve received so many requests asking for product and launch day of Camangi WebStation. [apparently, we have to thank some enthusiastic spreaders]. We also know that there are some speculations about whether Camangi is going to launch WebStation or not. So now, we’re very happy to announce that Camangi WebStation will be ready to market no later than early December this year!

First, I totally sympathize with folks in other countries not having access to writers well-versed in English. But, and I quote their footer line, “Currently this program is selling and delivering in Continental US area only.” Seriously, anyone targeting the U.S., much less only the upper 48, should have a native English writer on hand.

Second, they’re using the site to sign up interested parties to give them updates, “early bird” pricing, and also to find app developers. That’s fine and good, but it gives me the impression their primary purpose isn’t to reward interest but to locate it. For a launch in early December, late November should be the time for pre-orders, not an interest survey and to find developers.

That’s not to say there’s anything shady here, but the situation hardly fills me with enthusiasm. If I was among those questioning the release of this device, this certainly would not turn me around. (That they bothered to address such doubts, which surely are held by only a handful of folks, would only fuel them.) For now, my attitude will be “wait-and-see”.