While smartphones have ushered in the era of mobile digital photography as it was easy to capture and share images on the go, and the quality of the resulting images was often good enough in a pinch. Smartphones such as the Nokia N8, the iPhone, and Android models from Samsung, HTC, LG, and Motorola lightened users’ loads as consumers often did not need to carry a stand-alone point and shoot camera. However, more recently, with the phenomenon of higher resolution screens–Apple is using its Retina Display coin–images captured by smartphone cameras are now no longer good enough to view.

High resolution screens are now cropping up on smartphones, tablets, and laptops and Apple has a Retina Display on all three mobile computing category. MSNBC’s Gadgetbox is reporting that images captured on an iPhone–which once looked good on a regular display–are now looking grainy on a Retina Display MacBook Pro. Instapaper creator Marco Arment says that he is now driven back to his DSLR as “almost nothing I’ve shot since 2010 is usable,” referring to images captured on his smartphone:

As part of my 2012 computer-setup shuffle, I also replaced my laptop with a Retina MacBook Pro, and the first thing it screams for is a high-resolution desktop wallpaper. Great, I thought, I’ll just use one of my photos. (On my desktop, I use a solid gray background, but on my laptop, I like to have a bit of fun. And it would be a crime to put a solid gray background on that screen.)

Almost nothing I’ve shot since 2010 is usable. 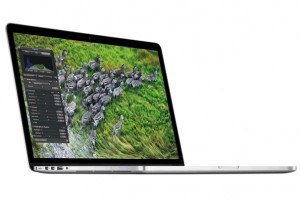 It looks like Retina Displays, and more generally higher resolution screens, may begin to spur sales of interchangeable lens cameras (ILC) as discerning users may find that the cameras on their phones may not be good enough. For the average consumer, smartphone cameras will continue to dominate the photography market due to the convenience factor.

The irony really is that Nokia’s PureView 808 smartphone, which has an impressively large sensor and 41 megapixels of resolution crammed into a smartphone body, has such great resolution for a camera phone and a lowly nHD resolution display on the phone itself.