Can RIM's PlayBook be the Best Android Tablet on the Market? 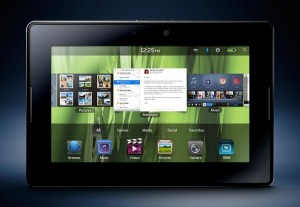 Research in Motion, makers of the BlackBerry PlayBook, may be toying with the idea of allowing Android applications to run on its PlayBook tablet. While the idea may seem unlikely, it could be a winning strategy for Canadian-based RIM who is fighting a battle against both Apple’s iOS platform and Google’s Android platform. The seemingly outlandish strategy was obtained from multiple sources according to BGR, which is first to publish the story.

It looks like to enable the BlackBerry Tablet OS to accept Android apps, RIM would potentially use the same Dalvik Java Virtual Machine (VM) as that found in Google’s Android OS. As the Dalvik Java VM is open source, RIM could either use it freely or enter an agreement with Google to formally bring Android Market and some Google apps to its platform.

It’s unclear if that move will happen, but if RIM and/or Google pushes forth with the strategy, it will be an interesting step for RIM, which has typically kept its platform closed. An alliance with Google may help make RIM’s tablet system more visible as RIM can go ahead and claim the same number of apps available on Android Market as other Android-only tablets, while still retaining its enterprise-driven heritage, security promises, and ease of use that has made RIM a popular smartphone brand. Having Android and the Android app ecosystem may appeal to the consumer audience.

The BlackBerry-maker has been aggressive as it tackles the apps-driven market. It recently announced a cross-platform SDK that will help developers create apps to target both the BlackBerry smartphone OS as well as the BlackBerry Tablet OS. The company has made attempts to push forward with its App World app store and to grow its catalog.

For Android apps to run inside the PlayBook, a number of steps must be taken before that happens in order for RIM to keep and maintain its enterprise clients who depend on a secure mobile computing ecosystem. For those clients, RIM probably must throw its weight at Google to manage third-party Android Market apps and make them more secure, ensuring that privacy disclosures are enforced as well as guaranteeing that user information isn’t obtained without expressed consent.

The company already has strong ties to Google’s Android OS. RIM had acquired The Astonishing Tribe (TAT), which was a small interface design and user experience design group behind the first generation Android experience. TAT has partnered with Synaptics as well to create the Fuze concept phone.

Although strange, a RIM-Google alliance may help as the two attempt to de-thrown Apple in its market leader position.