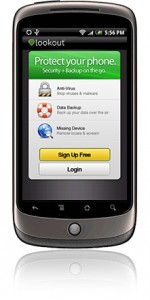 A New Jersey dad was going out to grab some food when someone shoved a .380 in his face and sped off with his car. Fortunately, Stalin Guzman had installed Lookout on his Android smartphone. For some reason, Guzman had left his phone in the car. He ran inside his home and called 911. Thanks to Lookout, he was able to provide responding officers with the location of his car and the suspect as he fled. Officers were able to arrest the car jacker and recover all of Guzman’s property.