We’ve all laughed at images of computer illiterate users trying to pay for online purchases by holding their credit card up to the monitor, but it if card.io has anything to say about it you’ll soon be pulling a similar move to pay for your next in app purchase. Card.io uses your phone’s built-in camera to scan your card and process payments for in app and online transactions — saving you from entering 16 digits and an expiration date. 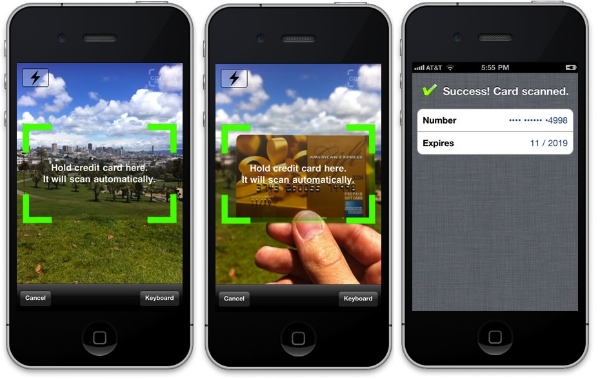 card.io scans your credit card with your smartphone's camera

The technology isn’t designed to compete with Square or NFC enabled in person transactions, but rather to be used in e-commerce applications. Instead of tapping out all of your credit card information, just place the card within the boundary and card.io will scan and populate the payment fields.

Card.io doesn’t use humans to verify the information, instead the company relies on a highly trained algorithm which will improve over time. The company wouldn’t tell ReadWriteWeb how accurate the app is, only saying that the, “vast majority” of card scans will as they are supposed to.

It will be interesting to see if this technology can compete with the existing payment methods for e-commerce. Interested developers can ask card.io for access to the private beta if they think their app is worthy of credit card scanning in app purchases. Developers will like the ability to use their own payment processing technology and users may find it easier to take a picture of their credit card than it is to type in the info on a small keyboard, but can that beat out using iTunes credit or PayPal?