Previously rumored as the Orange London smartphone, wireless carrier Orange took to the stage at Mobile World Congress to announce the device as the Santa Clara smartphone, an Android-powered device with support for Intel’s x86 Atom-based Medfield CPU, rather than ARM chipsets. The Orange Santa Clara phone is among the first smartphones to run on Intel’s mobile platform and is an Orange exclusive to wireless subscribers in the UK and France. 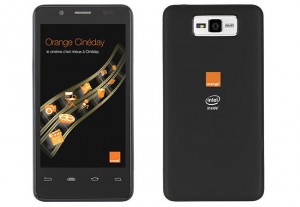 The device has a relatively slim profile, measuring at just 10 mm thick and weighing in at 117 grams. Interestingly, the 4-inch LCD touchscreen has a WSVGA resolution of 1024 X 600 pixels, a resolution more commonly found on early 7-inch Android tablets like the HTC Flyer, the Amazon Kindle Fire, and the Samsung Galaxy Tab 7. The resolution places the device squarely between the slightly lower qHD resolution in terms of pixel count and the new 720p HD premium standard for mobile displays.

The phone comes with an Intel Atom Z2460 CPU clocked at 1.6 GHz. It has 16 GB of onboard storage as well as a micro SDHC card slot to augment storage capacity. The device supports HSPA+ network connectivity, so 4G LTE won’t be on the board for this release.

The device has an 8-megapixel rear camera.

Still no word from Orange on pricing, though the phone is said to be arriving this summer.

Early benchmarking of the Medfield processor from Intel shows that the chipset runs admirably well compared to dual-core ARM CPUs, but it’s unclear how Medfield stacks up against quad-core offerings that are beginning to gain momentum in 2012, especially those running NVIDIA’s Tegra 3 CPUs.

Video courtesy of The Verge.

Today, Orange announces that it will launch a new high-performance Android smartphone in Europe this summer. Powered by Intel® technology, the device currently codenamed ‘Orange Santa Clara,’ will deliver the latest in smartphone capabilities and rich entertainment experiences to more customers. The phone will first be available exclusively to Orange customers in the UK and France, where its commercial name will be unveiled at launch.

The launch of this smartphone marks a significant development in Orange’s long-standing and successful strategy to deliver phones under its own brand. Now in its tenth year, it has helped drive new device partnerships and support Orange’s customer and mobilemultimedia growth by introducing more affordable feature phones and smartphones to its whole customer base. These phones are differentiated by being customised with simple and relevant Orange applications and services. Customer demand has led to the doubling of Orange’s own-branded portfolio in 2011, increasing volume from 7 per cent to 15 per cent of its total device portfolio. Orange aims to increase the volume of its own-branded device portfolio to 20 per cent in 2012 to better meet its customers’ needs, making innovative features, services and technologies more widely accessible.

Today, Orange is broadening its own-branded device portfolio with a new mobile partner, Intel, a world leader in silicon processor technology and computing innovation. At launch, the Orange smartphone will run Android’s Gingerbread platform with a planned upgrade to Android’s Ice Cream Sandwich platform shortly thereafter. The new Orange smartphone is based on Intel’s smartphone reference design and is powered by the Intel® Atom™ processor Z2460 and supports HSPA+ with the Intel® XMM™ 6260 Platform. Together, these Intel solutions deliver leading performance and energy efficiency while facilitating fast browsing and a responsive user experience. The phone has a 4.03” display, slenderdimensions at 123mm x 63 x 9.99, 16 Gb of memory and weighs in at 117g.

In addition, high-definition (HD) video will support a rich entertainment offering together with mobile HD voice for outstanding audio quality. It also boasts a camera that can take 10 pictures in under a second with 8-megapixel quality to ensure customers capture all the action so they can choose the very best pictures to keep and share. Also pre-loaded will be a number of services unique to Orange, including Orange TV, Dailymotion, Deezer (France only), Orange Wednesdays Your Orange and Orange Gestures.

“The proliferation of smartphones has brought a wealth of new experiences. At Orange we firmly believe that all our customers should benefit from the smartphone revolution, and we remain committed to delivering innovative content and services across a wide range of devices to help customers stay connected and get more from their phone,” said Yves Maitre, Senior Vice President of Mobile Multimedia and Devices, Orange. “For ten years, Orange has pioneered a successful own-branded approach to delivering to its customers high quality, affordable handsets in all price ranges, packed with locally relevant and unique services and features. We are delighted to be partnering with Intel to add such an exceptional device to our portfolio.”

Today’s announcement builds on Orange’s long-standing and close relationship with Intel across its PC and tablet portfolio, and Orange continues to support Intel’s innovation and development on convergent platforms.

“The Orange device is a fantastic example of the innovation happening on Intel’s smartphone reference design,” said Mike Bell, Intel Vice President and General Manager of the company’s Mobile and Communications Group. “We are pleased to extend our close collaboration with Orange to Intel-based smartphones. Orange has a long and successful track record of innovation which has produced great mobile products and services for their customers. By combining Orange’s unique applications and services with an attractive high-performance Intel-based smartphone, Orange is once again demonstrating its wireless leadership while providing more value and customer choice.”