The Casio G’zOne Commando 4G LTE is a rugged smartphone on Verizon that delivers the modern features users need in a durable shell that can handle water, drops and way more abuse than a traditional smartphone.

While there are cases available to deliver some of the features of a rugged smartphone to the iPhone 5 and devices like the Samsung Galaxy S4, some users prefer the built-in capabilities of a rugged Android smartphone.

Instead of adding bulk with a case that requires the user check o-rings and seals, the Casio G’zOne Commando 4G LTE comes with 810G certification for dust, water and shock built-in.

For users that looked at or own the original G’zOne Commando, this is a very worthy upgrade with a lot of new features. For users who are looking at the Samsung Galaxy S4 Active on AT&T, but want something more rugged, the G’zOne Commando 4G LTE is worth checking out. 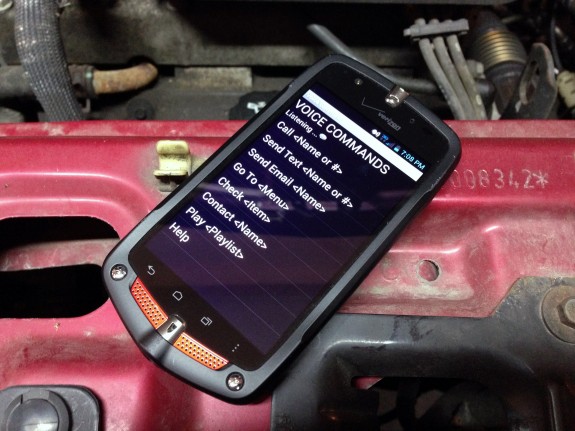 The Casio G’zOne Commando 4G LTE handles dirt, drops, water and is fit for places you wouldn’t dare that the iPhone without a case.

The two-minute video below shows the G’zOne Commando 4G LTE and the original G’zOne Commando for comparison, complete with a dip in a puddle, which is just scratching the surface of where this phone can go.

The G’zOne Commando 4G LTE looks similar to the original rugged Android smartphone Verizon debuted two years ago, and thankfully it delivers the same rugged features and a design that can handle dust, dirt and water, but with updates that help this phone compete with flagship smartphones in 2013. 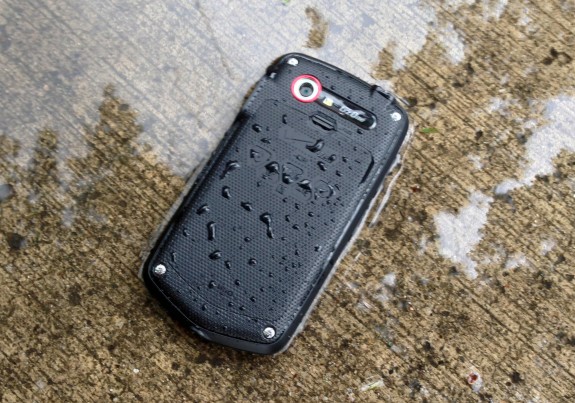 The G’zOne Commando 4G LTE design is very masculine with black and red colors, a textured plastic back and visible screws throughout the design. The charging port features an o-ring seal that keeps water out while the phone is in use. There is a small cover over the headphone jack, but users should be able to use headphones without worrying about water damage. The battery door locks in place as does the battery, so it won’t fall out with a big drop.

The Casio G’zOne Commando 4G LTE (left) features a lanyard for connecting to a belt or toolkit.

There is a small opening at the base of the phone that will let a user connect a lanyard or other holder, to keep a phone attached to a belt or toolkit while working in the field. The power button sits on the top of the device and easy to press volume buttons are on the left. A tactile button on the left lets users turn on glove mode or can be assigned to another app. The display always works with gloves, but this button offers a simplified screen with access to notifications, phone, camera messages and voicemail so it is easier to use. 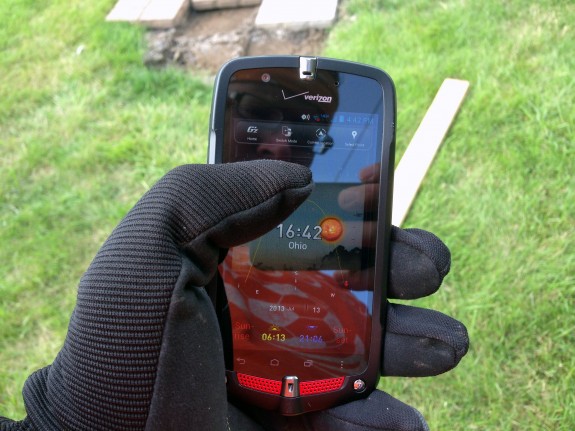 Use the Casio G’zOne Commando 4G LTE with gloves on.

The phone feels solid but in my two-week review period did pick up one mark from a drop to pavement. This doesn’t change the usability of the phone, but it would be nice to see a more resilient coating on the small silver part that sits over the earpiece.

A small scratch on the Casio G’zOne Commando. 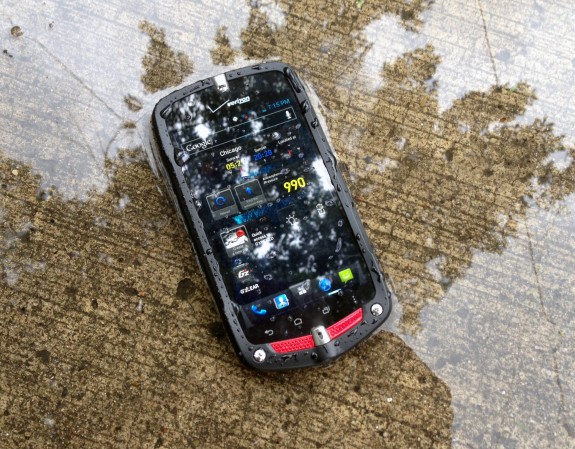 The 4-inch display works with gloves on and stayed scratch free during our tests.

Users will appreciate the larger screen, but will need to make do with a lower than average 800 x 480 resolution. This means text and photos will not look as good as they do on the iPhone 5 display or Samsung Galaxy S4 Active display  both of which  offer a higher resolution. In the garage or in the yard this isn’t a major issue, but users that read a lot of eBooks or surf the web primarily on their smartphone may notice the lower resolution. 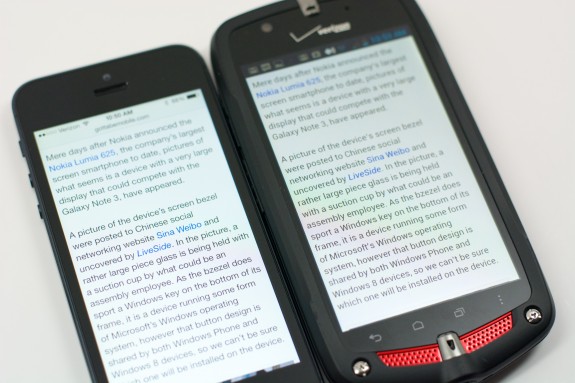 The screen resolution is lower than the average smartphone in 2013.

The Commando 4G LTE display is bright enough to use outside and in harsh lighting, though bumping the brightness up can take a toll on the battery.

The Casio G’zOne Commando 4G LTE doesn’t bring a quad-core processor like that found in the Galaxy S4, but it isn’t a slouch when it comes to performance.

While using the G’zOne Commando 4G LTE for the past several weeks I did not need to wait for the phone to respond while launching apps and while switching between apps I had open. The phone is also quick to unlock and quick to launch the camera. Taps registered instantly, and the performance was even good with gloves on. 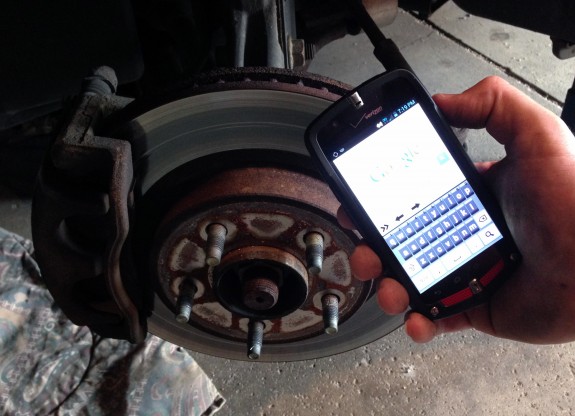 The Casio G’zOne Commando 4G LTE is ready to use wherever you are.

I installed the just released Riptide GP2 racing game and it performed well on the Commando 4G LTE, thought it appears the game tones down the graphics some compared to the Galaxy S4 which features better looking water effects.

The Casio G’zOne Commando 4G LTE uses a relatively small 1800 mAh battery that locks into place and sits behind a locked water-sealed door. 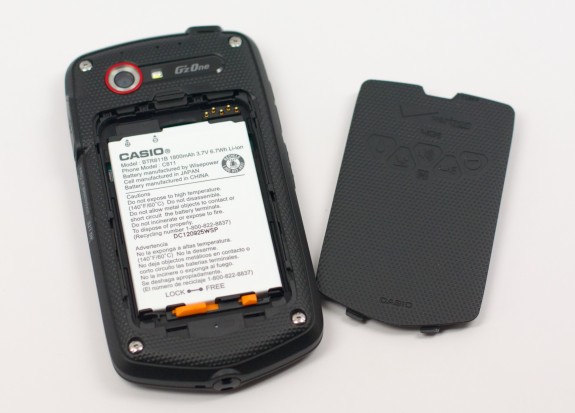 In my testing the Casio G’zOne Commando 4G LTE is capable of lasting a full day of average use combining WiFi and 4G LTE with on and off app usage. This is a good start, but heavy users that depend on the phone for business or who need it to keep going while hiking or outdoors will need to invest in a second battery.

Battery drains fastest when using the phone for location-based activities and with the screen brightness set at full while in use outdoors.

The Casio G’zOne Commando 4G LTE features a set of two front-facing speakers at the bottom of the device. These speakers are loud enough to fill a small room, but they don’t deliver the same level of sound quality or loudness as many competing smartphones. 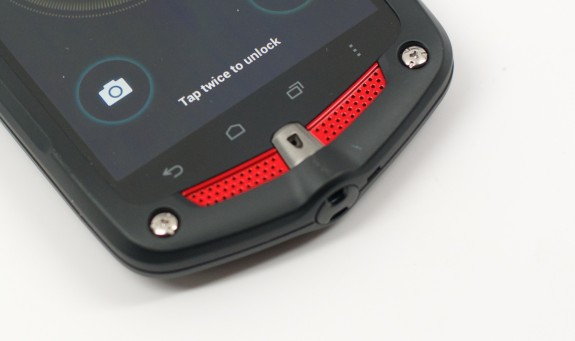 Two front-facing speakers sit at the bottom of the Commando 4G LTE.

Call quality is good while using the device as a phone. Speakerphone is loud enough for use in a car or outdoors while working n the yard or on a building project, but callers will know they are on speaker and you will sound far off according to people I talked with. 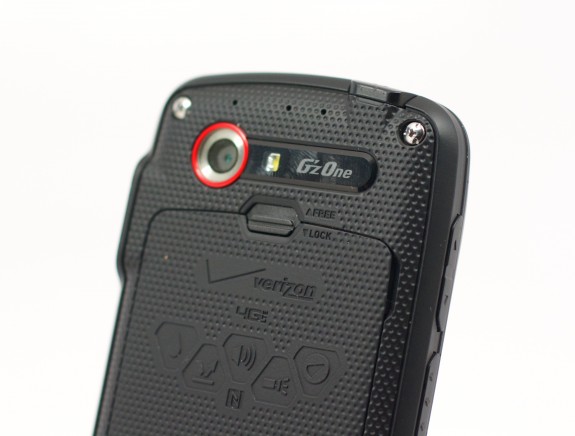 Upgraded cameras are a nice touch, but video is only so-so.

The Casio G’zOne Commando 4G LTE adds a front facing camera to the commando line, which is a much needed update that allows users to use Google Hangouts and Skype to video chat almost anywhere. This front facing camera delivers a good-looking video.

The rear 8MP camera delivers good-looking photographs, as shown in the numerous samples below. 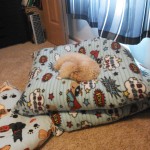 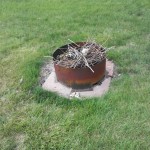 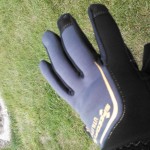 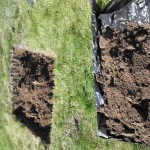 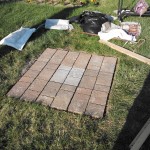 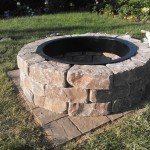 The video performance of the rear-facing camera is less pleasing with an odd wavy effect on videos even with fairly hands. The sample below shows this in action.

The Casio G’zOne Commando 4G LTE runs Android 4.0 which is now three versions behind the just announced Android 4.3. This is often the price users pay for a rugged smartphone, especially one that comes with a variety of skins and built-in apps. 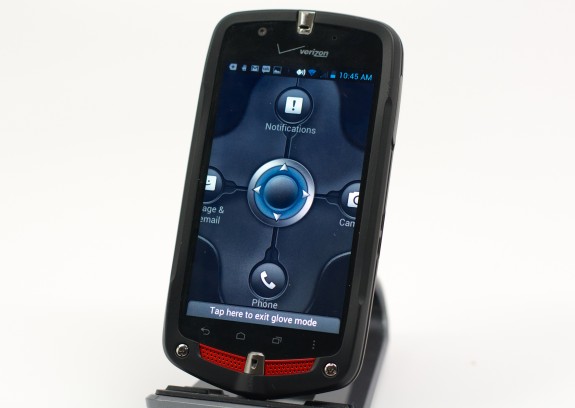 The biggest feature missing is Google Now, which would offer voice control and a smart assistant to users. Casio builds in Nuance voice control to deliver some of these features to users. Nuance works well, but it is not a Google Now replacement. While there is no comment from Casio about updates, there is a good chance users can expect at least one update to Android 4.1, 4.2 or 4.3 which will add Google Now and other features.

On top of Android 4.0 is a custom skin that includes a special lock screen that lets users tap twice to unlock or to launch the camera and also includes a compass and clock. 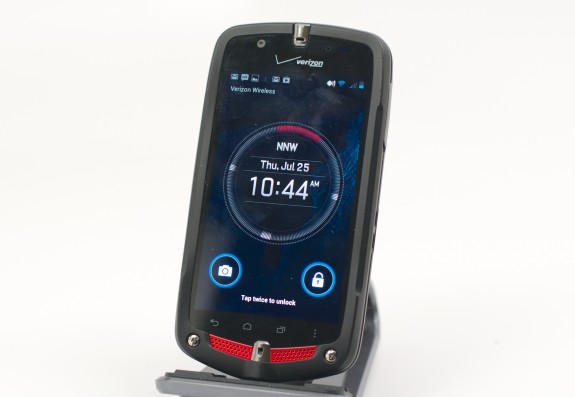 Once inside users see a widget that can show compass information, X and Y axis info and accelerometer information. There is also a nice widget that shows the temperature and offers advice on what to wear for the day. 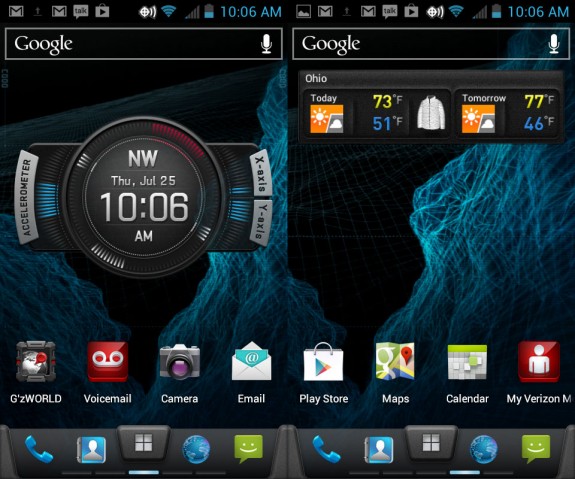 The G’zWorld app includes the ability to track and setup routes for hiking, walks and other outdoor activities as well as to record parts of the trip in photos. The G’zGEAR app includes 7 individual apps that include;

These apps offer access to information that is great for camping or outdoor fun. The Stargazer app looks nice and can help identify stars. 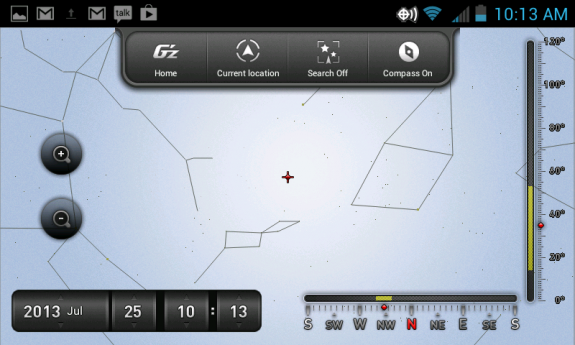 The Barometer and thermometer can help you know when to go fishing, or simply deliver more information about the weather. Both of these use the phone to measure the information, rather than downloading it from a remote source. 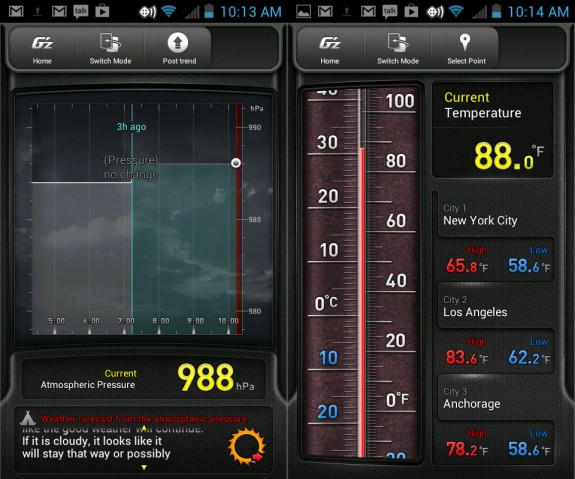 The G’zOne Commando 4G LTE includes a barometer and thermometer.

Is the Casio G’zOne Commando 4G LTE Worth It?

Verizon prices the Casio G’zOne Commando 4G LTE at $99 which is more affordable than the previous 3G model that retailed for over $100 for the longest time. This is a fair price, and well worth the $50 Verizon currently charges for the old model with no front facing camera, storage issues and an older OS with fewer features. 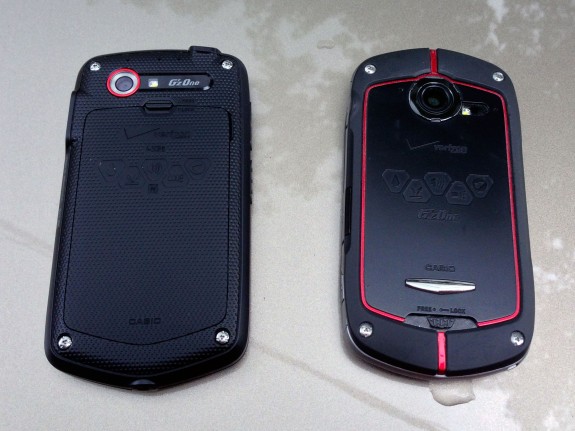 Users looking for a smartphone that can handle a little bit of water on the rare occasion may find the iPhone 5 with a waterproof case or the Samsung Galaxy S4 Active a better fit, but users that are constantly outdoors will enjoy the ruggedness of this phone that lets them use it without worry and without the expense of a waterproof case. 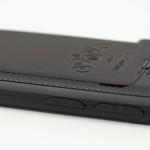 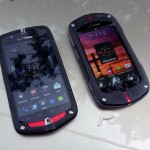 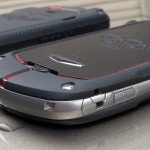 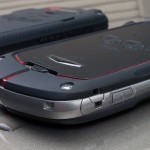 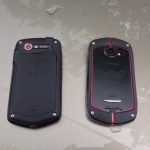 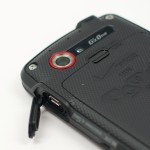