These days almost every smartwatch offers the same features or functions, unless it’s a Pebble or Apple Watch. Those using Android Wear powered by Google’s OS have a very similar overall experience. At CES 2016 Casio, the popular watch maker, announced its first smartwatch. It’s rugged, durable, and can last for nearly a month on a single charge.

Android Wear is Google’s wearable operating system for smartwatches and other devices. Released in 2014 with the original Moto 360, LG G Watch and others. It’s slowly grown into a capable operating system, but users can only do so much. Most are limited by battery life, so Casio is trying something different.

The new Casio Smart Outdoor Watch (WSD-F10) was unveiled at CES and has a few unique features that should help it stand out. Of course being Casio it’s extremely durable and rugged, and is made for the outdoors enthusiasts more than those looking for style. Here’s what potential buyers need to know. 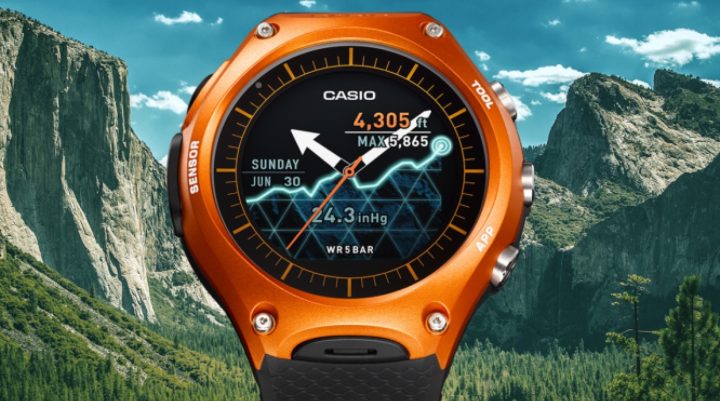 Casio’s new Smart Outdoor Watch runs on Android Wear, but it has a few tricks up its sleeve. The design and overall styling is very sporty, rugged, and durable. Most Android Wear watches are IP67 dust and water-resistant, but the Casio meets military grade testing. Like MIL-STD-810 for drops, shock, water, and can handle depths of nearly 50 meters.

However, the rugged aspects of the new Casio Android Wear smartwatch aren’t what make it special. It’s the rest. Casio has a dual-layer 1.32-inch 320×300 resolution display that works in two modes. One is Android Wear, the other is a “dumb” mode.

Users can enjoy the Casio just like any other Android Wear smartwatch, which will last roughly a day at most. However, the second layer of the LCD screen has a monochrome mode, for time only, which Casio promises can last for nearly 30 days.

Essentially allowing users to switch from regular smartwatch mode, to low-power monochrome time-only whenever they need it. Of course this takes away the entire “smart” aspects of the watch, but it gives users additional options if and when they need it.

Of course it’s still Android Wear and will focus on fitness, not to mention come with apps like RunKeeper, ViewRanger, and MyRadar. Not to mention be capable of running all the rest of the Android Wear apps available on the Google Play Store. Casio is aiming for an April release date, with a suggested retail price coming in around $500.