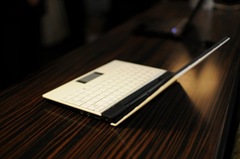 Comparing notes at CntrStg with fellow blogger Xavier Lanier from Notebooks.com, he tipped us to this little gem. Freescale and Pegatron are looking to bring an ARM based Netbook to market priced at $199 to $299. The design is promising eight hours of battery life in a very thin form factor. Xavier tells us he wasn’t expecting much from the form factor until he held it in his hands, but then quickly changed his mind as the device was much thinner than any other Netbook and that it is extremely well built. The current prototype has an 8.9 inch display but that may grow to 10 inches.

The designer for this device is Alain-De Lee, who also designed the look and feel of the Lamborghini special edition notebook. We’ll try to hook up and see if we can get some hands on with this. Thanks, Xavier for the tip. Check out his site for video and more pictures and the press release.