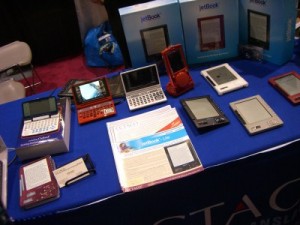 Okay, I tried to spend some time with each of the hot eReaders at CES, but there were plenty of others on display, more than I could possibly spend time with. So I decided to pick one other to check out and the one that caught my eye was the jetBook.

Unfortunately, I had burnt up too much camera battery before getting to them, so I only got 14 seconds for a back and front view and pricing. I feel bad about that, but I was impressed by their angle in the eReader game, aiming for affordability and simple operation. While everyone else is duking it out in the high end of the market with fancier hardware, stuffing in as many features as they can, these guys are trying to make the eReader for everyone else.

Page turning is done with a slider bar that makes sense in either landscape or portrait mode, and yes, the jetBook can flip between both. It is not an e-ink device. Rather it uses a 5-inch VGA reflective monochrome TFT screen. It was fine under the bright lights at the show and interestingly, I thought the glare of those lights was worse on some of the e-ink readers than on the jetBook.

What really caught my eye was the grip on the jetBook lite, which uses AA batteries instead of a built-in li-ion. That cuts its price to $150 compared to $180 for the li-ion version. This causes the battery area to protrude considerably, but it felt really good in my hand. I could get a solid grip on it without accidentally hitting any of the controls. No wireless so it sideloads via SD card.

No, it’s not a premium eReader like the stars at CES, but eReaders should not be just for gadget geeks or the deep pocket crowd. If I was shopping for a simple, straightforward eReader to carry around or an eReader for a kid, this would be it.