Apple is on the cusp of satisfying iPhone lovers with colored variants of its next-generation smartphone, the iPhone 5S, but that doesn’t mean everyone’s excited about the new color options. In fact, some French wineries are decidedly unenthusiastic about the champagne colored iPhone the company could  announce today.

While being interviewed by local French media site Local.FR, Charles Goamaere, a legal director at the Interprofessional committee for Champagne Wine, highlights the actually problem some in his group have with the idea of a Champagne iPhone 5S.

Surprisingly, it’s not the color that bothers Goamere, but rather the name of the color, saying, “We can’t say that ‘champagne’ color exists. Therefore, any company wanting to use the name ‘Champagne’ would be doing so to attract all the benefits that surround [the label.]”

As it turns out, since champagne isn’t an actual color, wineries and distillers in France have used the trade group to protect rights and limit the usage of the word ‘champagne’ in branding outside of France. 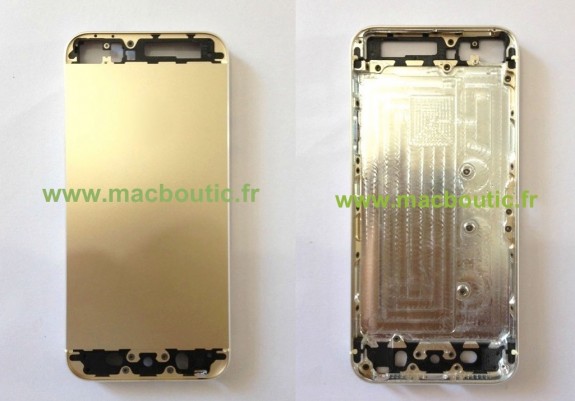 Gold iPhone 5S parts have leaked out prior to Apple’s launch.

While the company has traditionally stuck to battling other beverage makers for the rights to use the name, historically the group is under no requirement to restrict its brand protection to direct competitors. In 2002, the group sued a company from Sweden who named their yogurt Champaign, and has filed lawsuits against other companies since 1987. It’s the group’s claim that company’s trying to take advantage of the Champaign branding do so for it’s stature and low-key sophistication.

Read: iPhone 5S vs. iPhone 5C – What Buyers can Expect from Apple

While it’s unclear what the final branding for the lightly gold tinted iPhone 5S is, the trade group is making its position on the matter pretty clear. It won’t tolerate the use of its branding by any company that doesn’t make wine in the Champagne region of France.

If Apple does call the device color Champagne, it could be looking at another lawsuit like the one it faced after revealing the iPhone. In that case, Cisco sued Apple for violating its trademark for a device that had already been on the market. The company was also forced to make $60 million in payments for violating the branding of a Chinese company who’d already managed to trademark the name ‘iPad.’

The interview with Goamaere first surfaced online last month, so the trade organization and Apple could have reached some sort of agreement by now. However, with just an hour to go until the Apple announcement anything is possible.