We’re between seasons at Wayside Theatre where I serve as the Artistic Director. That sounds like it might offer some down time, but it doesn’t really. We only have a few weeks between saying goodbye to one company and welcoming new additions to our staff and Intern company. As we near the end of each season we always do a staff review of things that work well and things that don’t, as well as rules and regulations that need to be changed that can help us do our jobs.

One of the rules we’ve had in place for a number of years is that after half-hour (that’s show biz lingo for 30 minutes to curtain) we did not allow gadgets back stage. Half-hour is the official call for actors to report for the show. The crew usually has an earlier call to take care of pre-setting props, scenery, costumes, and checking out systems. Typically this means that the crew is done with their work while the actors are getting dressed and preparing for the show. And, since we didn’t allow gadgets backstage after half-hour, you’d find a number of the crew in the green room reading books, magazines, knitting, doing crosswords, etc… 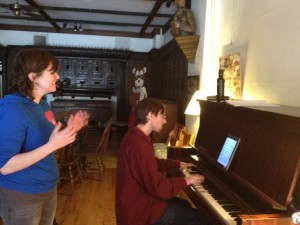 Like most rules our “no gadgets after half-hour” rule was put in place because someone was using a gadget and missed an entrance or an assignment. When it comes to rules I believe that most rules are put in place because someone screws up somewhere along the line.  In my new company speech each year I always begin discussing our rules by saying that in the beginning we only had one rule: Don’t eat the damn apple. And we’ve been adding them ever since. But that’s the way of humans.

But things have changed a bit in our small theatre that has caused us to review the no gadget policy.

It should be well know that I’ve been sporting a Tablet in rehearsals for quite some time now. That goes back to the Tablet PC days. And now I tote an iPad. Our production staff also uses a variety of different computers to do their work. But that’s all on the audience side of the footlights. Back stage and on stage is different world. In our last show, one of our quick change dressers used an iPad to do her preset of costumes each night, as well as to check her run sheet during the show and after. Run sheets are like a bible back stage as crew members use them to check off tasks as they are completed. Our musical director is now experimenting with using an iPad to read his music from. A number of musicians who work for us use iPhones with Apps that allow them to tune their instruments. And a few actors are using iPhones and/or iPads to record their lines for playback, to help them in the memorization process.

So,  we unofficially relaxed the rules this season to take advantage of the technology and the appearance of more iPhones and iPads among our team and actors. (We do have some Android devices, but the preferences here seem to lean towards iOS devices.) I’m also noticing an increase in productivity because some of our folks waiting backstage before the show starts are taking advantage of the time to get some work done. Of course some are using the time to play games.

The bottom line is that if crew members and artists are using gadgets to get their work done before, during, and after the show, we don’t want to deal with some sort of segmented rules structure that allows gadget use only for work purposes. So, we’ve changed the rules and now allow gadgets backstage, with the caveat that if they cause a distraction, we’ll revisit the situation. Maybe we’re behind the times, but, we’re at least moving forward a little bit.