Who else out there is completely hooked on the Grand Theft Auto III 10th anniversary edition? I am, I’ll admit. The only thing missing from my gameplay experience has been cheat codes.

Rockstar Games tried to dash my hopes last month when they said that the iOS/Android mobile version of the game doesn’t support cheat codes (along with custom mods, soundtracks, or mapping to external controllers). Boo hiss. Turns out that’s not quite true.

The mobile version of the game is a port from the PC version, and includes the same files and folders. When gamers discovered this they were able to apply mods created for the PC version to Android easily. 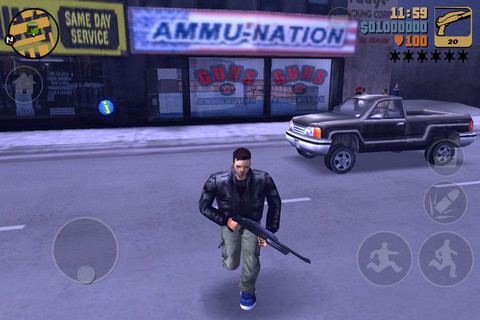 Knowing this, I wondered if the cheat codes were the same as well. Turns out yes. Members of GTA Forums discovered that most of the PC codes work on the Android version. You just need a keyboard to enter them.

I fired up my Logitech Bluetooth keyboard and gave it a try. I was able to apply cheats either while in the live game or in the menu screen by typing them in, just like on the PC. Huzzah!

Sometimes you’ll see “Cheat Activated” in the upper left comer or hear a sound that indicates success, sometimes you won’t.

If you don’t have an external keyboard you can still get in on this. On Android phones you can bring up the keyboard by pressing and holding the Menu button.

If you don’t have this button (oh ICS…) or are using an Android tablet, download GameKeyboard. It offers a lot of nice extras for mobile gamers, including a virtual DPAD, mapping, and more.

Unfortunately, there isn’t a similar utility for iOS that I’ve found. For that you may need to go the external route.

Let me know which cheat codes you got working in the comments.