On Friday, the guys behind ChevronWP7 announced that the program is now officially over. Those that participated in this program to unlock our Windows Phone devices were actually part of a “Beta Test” apparently. The program was put in place to give us an easy way to unlock our Windows Phone device. While many users like me used the unlock to be able to run “Homebrew” apps, the program was really in place for development reasons. It was meant to be an inexpensive way for users to dabble into app development.

According to the post on the ChevronWP7 website, this project served two purposes for Microsoft. The 1st was to get folks excited about unlocking and “Homebrew” and the 2nd was to get more developer support. They did a great job with the 1st goal, but admit the 2nd goal fell short of expectations. Microsoft knows it needs developers behind Windows Phone and I guess this was another way to try to get more. 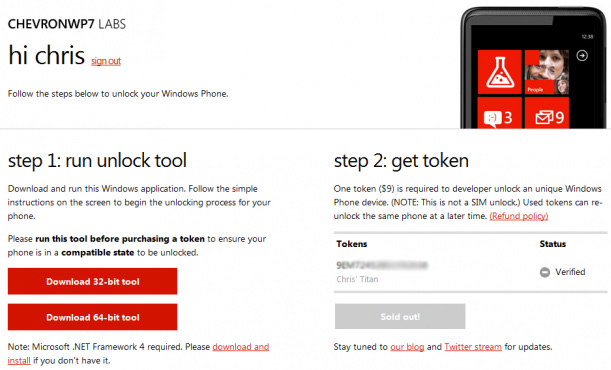 If you recall, they announced that they would no longer be selling unlock tokens back in January, but they mentioned on Twitter that the unlock solution was officially sanctioned and FUTURE PROOF. What did future proof mean? I took it as my HTC Titan is unlocked for good. Apparently that wasn’t the case or I miss understood that meaning.

We’d like to remind folks that our unlock solution is officially sanctioned and is future proof. ^ RR

If you have an unlock provided by ChevronWP7, you have 120 days left. I guess it will magically relock on August 11, 2012. You have an option that will extend your unlocked freedom though. Microsoft is offering a FREE Microsoft App Hub account. There is a catch, you have to sign up and pay for this account, sit back and wait for Microsoft to reimburse you. This account is for 1 year and after that, you’d have to pay $99/yr to continue.  How long will it take to get your money back?

All eligible refunds will be processed monthly 60 days after April 13, 2012. It may take up to 60 additional days for the refund to appear on your credit card statement.

Yes, you read that right. Microsoft will give you a free 1 year account, but you have to pay up front and then wait at least 60 days and up to 120 days later.

There are other options out there to be able to unlock your Windows Phone and I will start looking into to them soon.

I am pretty upset with all of this since I am one of many that purchased this unlock to be able to run apps that the “Homebrew” community provides us. Since the only app I really use often is to allow me to provide the readers of GBM screenshots, I am going to just let my 120 days expire. I don’t have the cash to float Microsoft and by the time the 120 days are up, I might have a new Windows Phone to use for testing apps and accessories. The lack of ability to take screen shots easily is a feature that I have been crying about for a long time. It’s time that Microsoft add this feature since Windows Phone isn’t really being marketed at enterprise users, there is no real reason to be concerned with the security reason that Microsoft says is behind the choice to leave screenshots out of Windows Phone.

After reading comments about this situation, some users seem to be happy with the offer of a free year, but others are with me in that they thought this was permanent. Getting a free year to use a service I don’t need isn’t enough to curb my disappointment and having to float Microsoft $99 for a few months is no way to do business with average users like me.

I think that this is bad news for Microsoft, not the negative publicity that they need at this point in Windows Phone’s growth.