The Chevy Bolt EV range beats the Tesla Model 3 range based on figures provided by both companies.

Originally announced in early 2016, the new 2017 Chevy Bolt EV range is 238 miles according to a new announcement from Chevy.

GM North America President Alan Batey boasts, “The Bolt EV is a game changer for the electric car segment and it will start to become available at Chevrolet dealerships later this year.” 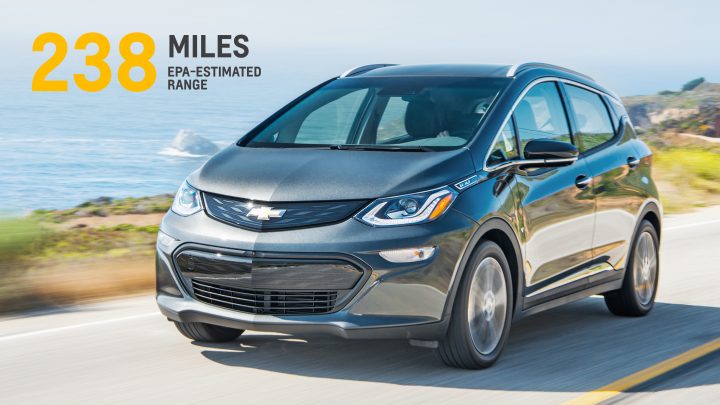 At DC fast charging stations users can get about 90 miles of range in 30 minutes of charging. This enables a 328 mile road trip with a short lunch break built-in to recharge.

Chevy expects a Chevy Bolt EV price of $37,500, which will drop to a more affordable $30,000 after a federal tax credit. The Tesla Model 3 starts at $35,000 before the $7,500 federal tax incentives making it slightly cheaper before users add options.

Buyers need to finance or pay the MSRP of $37,500 for the Chevy Bolt, but can claim federal tax credits to offset that cost. Those credits can apply to your tax return, but are not automatically factored into the car buying process.

A common theme in electric cars is the range, but Chevy is quick to point out they didn’t cut corners to hit this EPA estimated range. “While range is important, we knew Bolt EV owners would want more — more space and more power — and the Bolt EV delivers,” said Bolt EV Chief Engineer Josh Tavel. “Our team took special pride in optimizing every aspect of this vehicle, especially its impressive range and ride dynamics.”

The 2017 Chevy Bolt EV arrives at Chevy dealerships later this fall, with users able to buy and drive home. The Tesla Model 3 is up for pre-order now with deliveries not likely until late 2017.

A reconfigurable screen in the instrument cluster of the 2017 Chevrolet Bolt EV offers the choice of several layouts to display vehicle information.