Slim is definitely in with the Motorola Droid RAZR for the U.S. market, but our friends from across the Pacific will be getting their own variants launching soon that will come with beefier specs. The models made for the Chinese market won’t work outside of China as they will come with specialized phone radios for the Mainland, so don’t try to import any of these devices. 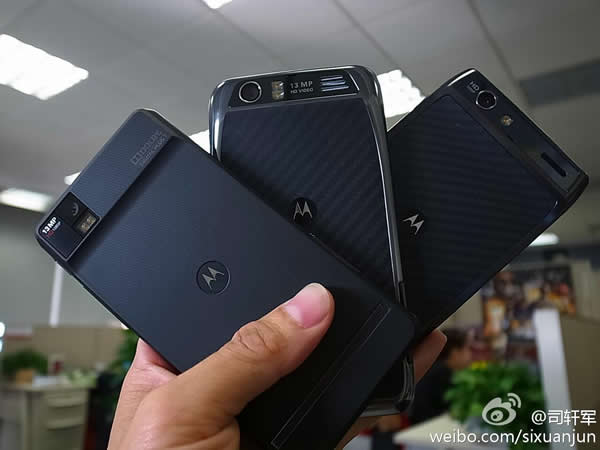 The Motorola XT928 comes with a CMDA2000 radio for China Telecom and will come with a 13-megapixel camera, up from the 8-megapixel released on the Motorola RAZR and the Verizon Droid RAZR variants. Stylistically, this device seems more like the a variant of either the Droid Bionic or even the Droid X series, and Engadget says that the device may lead to the Droid X3’s reference platform in the States as a reader had spotted a similar prototype at a coffee shop near Motorola’s U.S. headquarters in Illinois.

The second device is the MT917 and features the TD-SCDMA radio. This device looks most similar to the Droid RAZR, but with rounded edges and a slightly thicker body. The increased 1 mm in thickness will help the device accommodate the same 13-megapixel shooter that’s on the XT928. Also, in terms of a bump in specs, the MT917 will also feature a larger 4.5-inch 720p HD display, which could potentially explain why the Droid RAZR has such a huge bezel surrounding the screen.

It is believed that both versions will launch in China by the end of the year.