While this probably won’t come as much of a surprise to those of you with your finger on the pulse of Android, Google’s Chrome for Android browser does not Adobe Flash. Go ahead, try and go to a site that has Flash content. You’ll be greeted with a notice that says that you need to update your Flash Player. Downloading an update won’t help here, folks.

Adobe itself has confirmed that Flash is not supported within the Chrome browser.

The company does go on to say that Flash is still functioning within the current stock Android browser so if you need to get your Flash fix, you can find it there.

Or you’ll need to find another solution on the Marketplace not called Chrome.

As we said, this shouldn’t come as a shock. 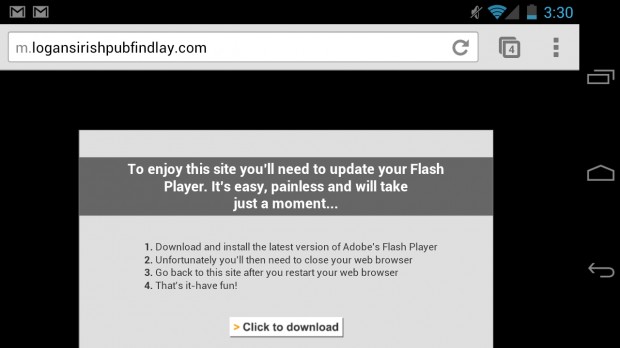 Last year, Adobe announced that it would be abandoning Flash for Android and other mobile operating systems. What that means is that Adobe will no longer be updating its Flash Player.

It will however continue to support its Flash Player for those platforms through bug and critical security fixes.

For some of you, Flash is going to be extremely hard to give up. However, Google’s Chrome browser has some pretty impressive features that might just entice you to kick it to the curb.

Ultimately, the nicest feature that Chrome brings to the table is the ability to sync your Google account across your Android devices. So if you use Chrome on your Android phone, you’ll have your bookmarks and other features available on your tablet or Chrome browser on your PC.

If you feel like giving Chrome a try whilst weening yourself off of Flash, you can find it on the Marketplace right here.