The massive December 2015 Clash of Clans update is only a few days away, and that means some important new details and sneak peeks are going to be announced all weekend long. This morning the developers, Supercell, officially revealed the brand new 3rd hero called the Grand Warden and more. Read on for all the details.

In October the developers of one of the most popular mobile games on the planet announced a major new update was coming. It will bring Town Hall level 11, a 3rd hero, bigger map sizes, and much more. The Grand Warden 3rd hero is finally official, and looks to be a combination between the healer and a wizard.

On November 23rd Supercell started its two weeks of sneak peeks, which will end on December 7th. That’s when we’re also hearing the update will be released on Android and iPhone. After over a month of waiting, we finally know what the 3rd hero is called, what it does, and how it looks. Check it out in the video below.

The third hero will officially be called a “Grand Warden” and is some sort of magical wizard, one that can also fly. It’s features are a combination of the healer and a wizard, and he can be set to walk, or set to hover or fly. This will allow him to fly with dragons or balloons over walls during an attack. Or while set to ground he’ll wander with giants and other ground troops.

While walking or flying the Warden has a halo around him, with a pretty good radius, that adds extra power or hit points (HP) to troops nearby. Essentially making everything in its radius stronger during attacks. Then, as you saw in the video above his special ability turns everything lava orange temporarily, makes all troops near him invincible, and puts their health back to 100%. Saving this ability until halfway through a raid will prove to be very important, powerful, and a great way to 2-3 star huge bases.

The Grand Warden won’t cost Dark Elixir like the other hero’s, and instead will cost 6 million Elixir to buy. He will get his “Eternal Tome” healing ability at level 5, level 10, level 15, and level 20. This new hero will max out at 20, instead of 40 like the King and Queen. 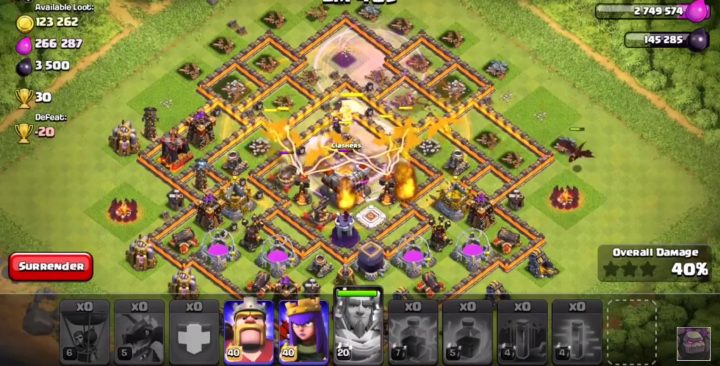 Orange dragons are invincible momentarily while inside the Wardens Radius

Today Supercell only showed us the new third hero called the Grand Warden can do while on offense, and are saving his defensive specialties for tomorrow. That said, most rumors suggest he will protect the King and Queen while on defense, protect Clan Castle troops from attackers, or even heal buildings for a short period of time, but we’ll have to wait and see.

Supercell also confirmed more achievements will be added to the game, which will earn players gems when they complete achievements. Things like donating spells with the new spell donation feature, destroy Town Hall 11’s, and other new achievements.

Over the past 10 or so days we’ve learned Town Hall sniping no longer gives players a shield, Town Hall’s also hold 1/5 of players money, so protect it. There’s a new personal break timer, a village guard concept where we can leave the game and not have to worry about getting attacked, and players can even attack through shields, without losing it. Allowing us more time to attack and save up money.

There are also five additional defensive buildings for TH11, like a 4th x-bow and more, level 9 wizard towers, level 7 minions and other changes. Then all players can expect higher loot and league bonuses, changes to the trophy system and more will be announced tomorrow.

This will be one of the biggest updates in the history of Clash of Clans. Additional information will be announced tomorrow, and hopefully it gets released on December 7th, or early next week. Stay tuned for more details.