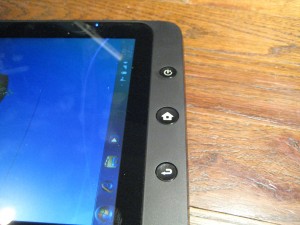 Hugo Ortega, the man behind TegaTech has sent several gadget bloggers, including me, long term review units of his new TEGA v2 Tablet/Slate. Some got their units yesterday, some, like me, today. I’ve posted up some comparison shots with the iPad and will be posting more about the TEGA v2 over the weekend and into next week.

All of that said, good friend and fellow blogger James Kendrick made some statements in a post, one of which is a mistake, and the others that are being completely misconstrued by some.  Now that I’ve had a very little time to go hands on with the TEGA v2, I’d like to try and clear up whatever confusion surrounds those comments that run the risk of turning into FUD.

First, the mistake I think JK made was saying that he needed to attach a keyboard when it came to choosing which OS he wanted to boot the TEGA into. The TEGA v2 dual boots Windows 7 and Android. When you first hit the power button you’re presented with a boot options screen that asks you to choose between the two with Android as the default selection. You have to cursor down to the Windows option if you wish to choose that OS. James is completely accurate when he says the touch screen isn’t active at this point in the process, removing that as an option for making an OS choice at this point, but you don’t need to hook up a keyboard to make this selection. Unlike most Android devices that have four buttons the TEGA v2 only has three. The upper most button is labeled as the power button, the middle button is a Home button, and the lower button is labeled as a back button or perhaps it is a carriage return. If you hit the Home button you can cycle between the two options (Android or Windows) and then when you hit the lower button you then activate that selection.

Now on the the things that are getting misconstrued. James says, (after walking through what he did on boot up for Windows):

The first boot on each platform was extremely telling: Android  was less than 15 seconds; Windows 7 took almost two hours. These two scenarios were not unique to these platforms, and were performed on the same hardware. The tablet form is tailor-made for the mobile OS, and Windows just can’t compete with that.

The telling phrase here is “first boot.” The TEGA v2 is not unlike any new Windows OS device on the planet that you might boot up from scratch these days. Let me rephrase that for clarification. The TEGA v2 is just like any other new Windows OS device out there. After going through the initial setup for Windows, performing the circus that is the myriad of Windows Updates (remember Microsoft released 49 patches this last Patch Tuesday), and installing anti-virus software, you’ve made a serious time investment, although using the phrase time investment is kind. Windows is not a great Out of the Box Experience (OOBE) on any machine, especially the further away you get from the latest Service Pack and the updates multiply like rabbits on fertility drugs. Any Windows user knows this, or should.

I can’t report on the total time it took me to get through all of those steps because I performed these tasks in stages as my other job needed my attention. I can report that it took me about 35 minutes to boot Windows for the first time, run the initial setup, and download the first series of Windows Updates. There were two more Update sessions yet to come, plus installing anti-virus software.

I can say that after all of that insanity was done, a normal boot into Windows (I define normal as when all the drivers are loaded, WiFi is active and I can open a browser) takes me around 57 seconds on the TEGA v2.

The bottom line on this is that JK is correct here. When it comes to the Tablet experience, those running Windows 7 just can’t compete with a more streamlined Mobile OS on the same, or in my mind, even on different hardware when it comes to “first boot.” I wouldn’t be surprised if his two hour time frame wasn’t correct. The fault in that lies with Microsoft. I can only imagine how long that experience would be on the supposed HP Windows Slate, given how much CRAPWARE and how many tools HP loads in addition to everything else we’re forced to swallow with a Windows OOBE.