Google Music is a great service that allows me to take my entire music collection everywhere without having to worry about the limited space on my phone or tablet. However, there’s one aspect of it that leaves much to be desired: other music programs don’t have access to the tracks, even when you download them for offline listening.

As much as I like the Google Music service, I prefer other Android music players. What to do?

A little while ago an app called Google Music Sniper came to the Android Market offering a solution. Google shut the dev down for the name, so he relaunched it as Cloud Music Sniper. 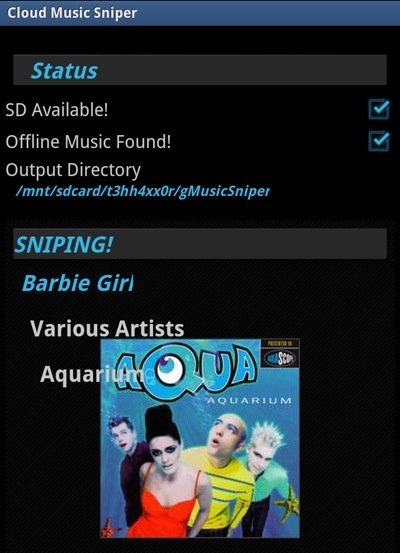 The app works the same. It will grab the music GM stores offline, move it to a folder any music app can read, and modify the file IDs so the artist, album, and other information remains intact.

The idea is good, the UI and execution needs work. Though much improved with a recent update, this app needs a big BETA sticker slapped on it. Instead, it’s selling for $1.99 on the Android Market.

People desperate for a way to bring Google Music together with their favorite music apps will wonder whether Cloud Music Sniper is worth the money. Read on to find out. 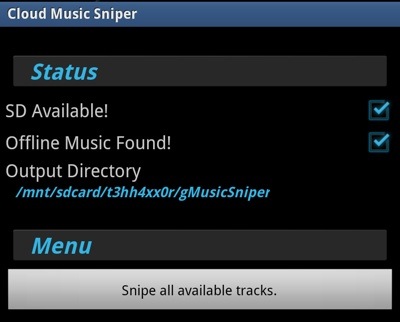 The first thing you’ll notice about Cloud Music Sniper is that it’s a very basic, bare bones app. The user interface needs an aesthetic and a functional overhaul to make it look better and easier to understand. It could also use a tutorial to help less savvy users understand exactly what they need to do both in this app and in Google Music since part of the workflow begins there.

To start, users must open Google Music, choose tracks to make available offline, then wait for their phone to download said tracks. Then you open Cloud Music Sniper, which automatically searches for and verifies the presence of offline tracks.

CMS recently streamlined the interface to provide just one button to start the copying and tagging process — a good move. Tapping Snipe All Available Tracks copies the files to the pre-defined Output Directory, then adds the artist, album and other identifying information. 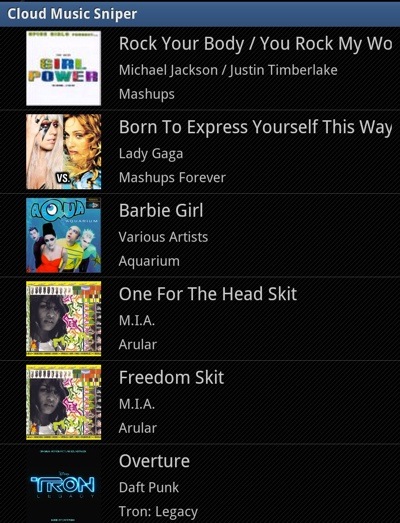 Once the app is done, it shows a list of all sniped music

Once the process is complete other Android players will see the tracks and be able to play them.

Most of this information a person can glean by reading the description of the app or looking at the interface, but it’s easier to grok if you’re tech-savvy and understand how Android and Google Music works. If you don’t, it’s easy to get lost at first.

This problem is fixable with interface tweaks. As I’ve said before, a good app developer tells the user how to use their app from the start.

I also hope the dev will fix dialog boxes and informational text, as it often gets cut off.

The dev needs to work on messages showing in full

Again, an important message is cut off

Cloud Music Sniper has just two settings: choosing an output folder for the music and whether users want to delete tracks from Google Music’s cache after sniping them.

On the second option, the default is to delete those tracks from the cache, however I think it’s better to leave them there. If something goes wrong with the sniping (as it did several times during my testing) you won’t have to re-download the tracks.

Plus, Google Music will re-download them, anyway, if it notices the files are gone. Better to just let the user go back to Google Music and uncheck “Available Offline” when they want to.

Though you can change the output folder, I’ve found that the track tagging often fails if you do this. But before you get to that you have to deal with the file browser.

The file browser the app utilizes is confusing, doesn’t put users into the correct directory, and sometimes takes you to a dead end you can’t back out of. If you don’t know what you’re doing, it’s easy to get lost or make a change that you can’t reverse except to uninstall, then reinstall the app (which I had to do).

The solution to the failure to tag tracks may be to give users the option to move them after the app finishes sniping. Of course, you can just use a different file browser app to do this yourself (I suggest Astro).

When Cloud Music Sniper works, it provides a great service. I was able to play my offline music in doubleTwist with no problem and the artist, album and other information intact. The app doesn’t change the tracks in any way except to add that information, so you get them at the same bitrate you find on Google Music. It would be nice if it also brought over playlists, but that’s a minor issue.

I also like that the developer is continuously improving the app to make it easier to use and understand. That gives me hope that future upgrades will eliminate the problems outlined above.

With some work this could be a top-notch app worthy of the $1.99 asking price. Right now I would only recommend it if it was free.

Some Android owners don’t mind doing extra work to get what they really want. You still shouldn’t have to. And those with fewer technical skills will grow frustrated (and even angry if they miss the refund window) with the app’s quirks.

Right now Cloud Music Sniper is the only solution for users who want their Google Music in their regular player with track data intact. I hope that the developer works to make it worthy of the $1.99 price tag or that a better app comes along soon.