The official Microsoft Office for iPad app remains missing in action, but that doesn’t mean that corporate users are without options.

CloudOn is the latest Office for iPad service to emerge, competing with Onlive Desktop for a place on corporate users’ iPads.

Unlike many of the Office iPad alternatives, CloudOn delivers a virtual version of Word, PowerPoint and Excel. This means that users get a traditional Office interface and several other features, including the ability to track changes.

Can CloudOn Deliver a premium Office for iPad solution? Read on to find out how it handles in our Cloud On Review video below.

CloudOn only offers access to three Microsoft Office apps on the iPad, which means there’s no Outlook or Access support. CloudOn is a free app and service, using Dropbox and Box.net for accessing and storing files. If corporate policies prevent users from storing files on third-party services CloudOn won’t work.

Until Microsoft decides to ship Office for the iPad, users will need to make compromises, but with CloudOn users can get past a few restrictions that plague iPad Office apps.

A big plus for current Office users is that CloudOn’s Word, Excel and PowerPoint apps look almost like they do on PC or Mac, complete with the ribbon. Unfortunately the Ribbon doesn’t look quite right on the iPad and the user interface isn’t suited for touchscreens. The text also blurs while scrolling and selecting text is a pain.

Users can track changes in office documents on the iPad, which is a huge deal for users that must collaborate on documents. The app allows users to view and track changes on Word documents, which appear on the desktop when saved to Dropbox. Comments can also be added to the document just like in Word on Mac or PC. 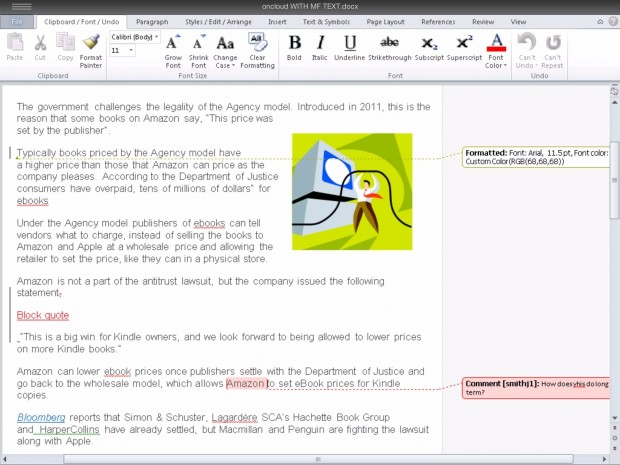 CloudOn is an Office app for Ipad that allows users to track changes.

A group of employees could take turns editing a word document in a shared Dropbox folder to collaborate with tracked changes, though it is not the most elegant solution.

Despite the benefits, CloudOn comes with a collection of issues that could easily be deal-breakers.

The app would not allow me to copy text from another iOS app into a Word document in CloudOn. That means no quoting a webpage or adding information from an email. This is a major hangup for me.

There is no offline mode, so users cannot download a document to work on while on the road or in the air. This is unavoidable, but a problem for many users.

The Word ribbon is not ready for touchscreens.

CloudOn is optimized for the iPad, but Word, Excel and PowerPoint are just as they are on the desktop. That means users will need to tap small menus and options, designed with a mouse in mind, not a finger.

Still Waiting for Office for iPad

CloudOn offers several benefits over iPad Office apps, but in the end it falls short of delivering a stellar Office experience on the iPad.

Many users are able to get by with Office for iPad alternatives, but for those who can’t the wait continues.

With millions of iPads in use at schools, businesses and in homes, Microsoft must feel the pressure to deliver an official Office for iPad app. The only question is how long will it take.