Cobra’s new JoyRide for Android helps make Android phones safer to use while driving through a specialized app.

The Cobra JoyRide also has a physical button which is used to control the phone. Users can set the button on the car charger to cycle through a list of apps, send messages to friends, or call them. Users can assign up to four different commands to the single tap, double tap, triple tap, and tap and hold commands. That way, users can control their phones without ever having to touch the phone while driving. 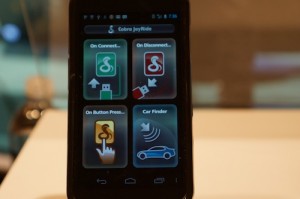 Users can also set the Cobra JoyRide to automatically reply to text messages and phone calls while driving so friends and family know they’re driving and can’t talk right away. It should help save a few people from texting and driving, assuming they use the feature.

The Cobra JoyRide serves two purposes: it charges Android devices, and helps drivers interact with their phones more safely. Those two features certainly seem worth the $40 Cobra is charging for the device.