Much of the technology press has been going on about the death of the spec. Finally coming to the conclusion that the specs on paper don’t matter as much as the actual device use experience.

It was a bit of a surprise to see a funeral for specs happening this week, because almost every consumer I know had buried specs years ago. Sure, there are geeks like me who like to know about the specs of a device, but the general consumer doesn’t care — partly because specs have become too confusing to use as a comparison of devices and performance. 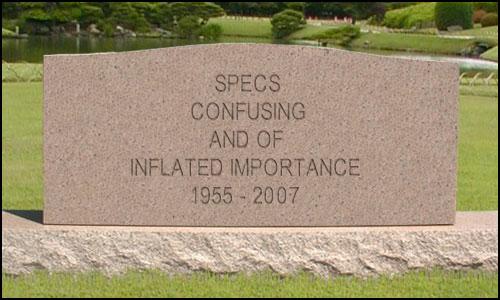 Specs are long dead and buried by consumers

Back in March, we called attention to the meaningless state of specs in the tablet wars, and went so far as to claim that specs don’t matter to shoppers. These articles are just seven months old, but specs have been dead for much longer than that for the average shopper.

Here are the questions people ask me when they are looking for a new phone, tablet or notebook.

And here are the questions they don’t ask;

I see this more and more, whenever someone wants a new gadget, phone, computer or TV, they only want to know if it will meet their needs. Sure, there are some baseline specs that get mentioned, but these are only needed to avoid the crap that makes it onto store shelves.

AMD tried to fix this problem earlier this year with the AMD Vision program. The program had promise, but because retail employees didn’t know how to communicate the program to shoppers, and the smattering of specs that accompanied the Vision branding.

TechCrunch and Gruber are right, specs are dead and spec based reviews are flawed  — but this isn’t a new thing. If you can find an average consumer that is seriously making their next gadget purchase based on specs alone, I’ll show you a shopper who won’t be happy when they unbox their gadget and try to use it.

It’s high time more companies find ways of using their user experience to sell gadgets, and to set them apart. I have nothing against quad core smartphones, but if all the company has to sell the device is that it is a quad core phone and it has a 720P 5″ display, it’s not going to do so hot.

If companies would admit that specs are dead and buried, and focus on selling devices with a bullet point list of real features, it would make my job as family tech expert much easier, and could force intense and tangible competition that brings great new gadgets to our hands.