There’s been some dissonance in the market place on what iPad rivals are pricing their tablets at and what consumers are willing to pay for a non-Apple slate, and that mix up is to the tune of approximately $100. According to a new iGR market survey, in order for iPad rivals to be more competitive in the market place, manufacturers would have to charge at least $100 less than Apple’s pricing for the iPad.

The vast majority of respondents are only interested in an iPad — and it would take a discount well over $100 to convince them to buy another OEM’s tablet. 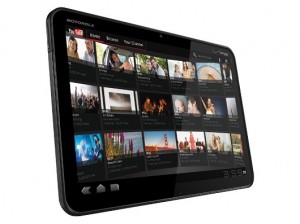 According to the survey, customers are willing to spend a premium for an Apple tablet, but are much less likely to spend the same amount for a competing Android tablet. The research says that when it comes to Apple, consumers are ready to shell out $500 or more for a slate, but when it comes to Honeycomb and other Android slates. they are much more likely to spend less than $400 or more.

The pricing comes despite similar hardware specifications of competing tablets, including mobile broadband connectivity, display size, resolution, processing power, storage capacity, and other specs. In the post-PC era, Apple has shown that it is defining the market by the user experience, rather than through hardware specs. That given, there have been, in the past, many Android tablets that have launched at price points higher than competing iPads with comparable specs, such as the Motorola Xoom 4G, which debuted on Verizon Wireless for $800, and the HTC Jetstream for AT&T, which retails for the same $800 sans contract. Those manufacturers justify the $70 premium over the comparable iPad rival due to 4G inclusion, and in the case of HTC, a digitizing stylus.

It’d be interesting to see if the improved Ice Cream Sandwich‘s focus on the user experience will change customer’s minds on Android tablets and will level the playing field. So far, the iPad commands about 70 percent of the tablet market, with cheaper Android rivals–like the Barnes & Noble Nook and the Asus Eee Pad Transformer–garnering more sales than premium-priced models. However, there is one ace up Google’s sleeves, and that is Amazon. The Internet retailer is prepping the Kindle Fire, a 7-inch Android slate with a custom UI, integration with Amazon services, premium specs, and will debut at just $200.