According to Nielsen more consumers are planning to purchase or want an Android phone over an iPhone or Blackberry. During the first three months of 2011 the company most noted for their TV ratings surveys asked mobile users which mobile OS they would rather use. Thirty-one percent desire an Android device while 30 percent long for iPhone. Only 11 percent are pining away for a Blackberry. 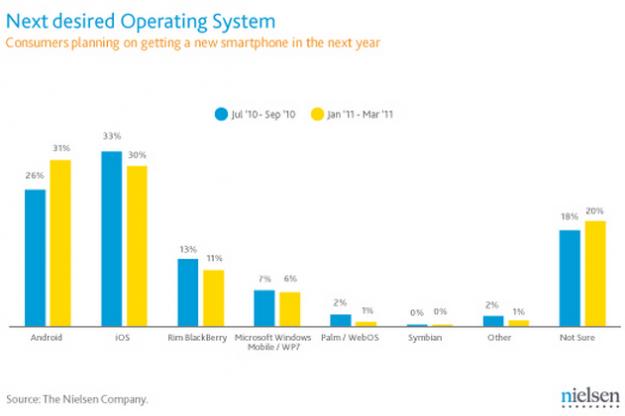 The survey was last done between July and September of 2010 and at that time iPhone led the way with 33 percent to Android’s 26 percent. Blackberry had 13 percent last year.

Of the other mobile smart phone platforms, Microsoft’s various Windows Phone or Windows Mobile garnered only 7 percent last year and slipped to 6 percent this year. Palm fell from 2 to 1 percent and Symbian which runs on Nokia phones was below a single percentage point in both surveys. Other took 2 percent in 2010 and fell to one percent this winter. And those who were not sure went from 18 to 20 percent.

This follows the pattern of mobile OS developers somewhat. We reported that iPhone and Android lead the way for the important crowd of app developers. They are also not keen on Microsoft’s platform, Symbian, or Palm’s webOS. Unless Microsoft or RIM can step up their efforts, it looks like a two-party system in the mobile OS sector going forward. It is still too early to judge, especially with Windows Phone being less than a year old and RIM just releasing it’s new PlayBook. HP doesn’t even have a webOS device out there yet and the deal between Nokia and Microsoft could create a big shift in the favor of Windows Phone. This survey shows one thing — competitors better get moving.