Coverjam Gives Each iOS Song Its Own Little Slideshow

Coverjam is one of those iOS apps that, once you hear about it, you’re surprised that nobody had thought of it before. The new app by Electric Pocket uses the combined powers of Instagram and Flickr to provide each audio track with its own unique slideshow. 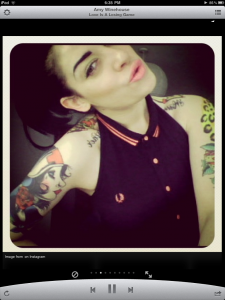 You start the app by selecting a track, album, or playlist from your iDevice’s music library. Once starting a song, a slideshow of images that are tagged with the artist’s name will start almost immediately. There will be a limited range of pictures for each track, but each time you advance to the next song, a whole new batch of them will be shown.

These images can include such varied shots as: concert photos, album covers, candid shots, pictures with fans, obscure shots of old magazine covers, and (occasionally) random pictures that don’t appear to have anything to do with the artist. The variety is great, and shows us just how many celebrity images Instagram and Flickr are saturated with.

They combine to make an intriguing visual presentation. This app has the potential to introduce users to a more visceral (perhaps even artistic?) way of getting to know their favorite musicians. Reading on Wikipedia about Amy Winehouse’s various public incidents is one thing – listening to a track of hers while seeing the expressions on her face in an assortment of candid and posed shots can introduce you in a completely different way.

It’s somewhat reminiscent of the days when people would buy albums, tapes, or CDs, and browse through the fold-out lining art. Only Coverjam’s way may be better, due to the fact that they aren’t all images that were hand-picked and manufactured by somebody selling an album.

This collage shows four of the images that came up for a Snoop Dogg track.

Of course not everyone wants to hear and see their music. It also won’t do anything for those who get their iOS music via streaming or subscription services like Pandora or Spotify.

But for those that do pack their iDevices full of iTunes-synced music (soon iCloud-synced music too) Coverjam can make for a more telling backdrop than many music videos. Why? Because anything that has been tagged with the artist’s name on the two photo-sharing sites is fair game. It isn’t likely that Snoop Dogg’s publicist would promote the rapper with a shot of him beaming widely for the camera with a random fan – but here you can see that.

Below you can see the app in action with two different songs. The first track, by Moby, gave us the most oddball assortment of unrelated images that we saw (other Moby tracks showed more appropriate images). The Nirvana song in the second half of the clip shows a much more typical slideshow from Coverjam:

Coverjam offers a free iPhone/iPod touch version, which is ad-supported. There is also a $.99 premium version available, which removes the ads and also gives iPad users a native tablet interface.

The idea behind Coverjam is one of those that’s both simple and creative enough that it just might find a following with iOS users. It’s a fun new way to experience your music. How often do you come across something that can do that?