Several case/keyboard third-party accessory manufacturers are updating their popular iPad cases, which integrate a keyboard along with some form of case-like protection, to support Apple’s new iPad 2, which is slated to go on sale at 5 PM today at retail stores across the U.S. Both CruxCase, which will create a ClamCase for the iPad 2, and Zagg, which makes the ZAGGmate that we had reviewed over at Notebooks.com, are releasing versions of their case/keyboard combo to officially support the iPad 2, which won’t be available until after the launch of the tablet. 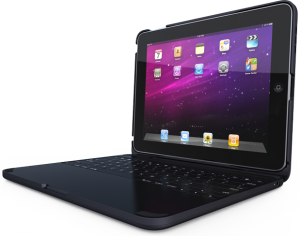 The CruxCase, which was originally designed for the iPad 1, will get an update to support the iPad 2’s sleeker design; the new case will be called the ClamCase. Both the CruxCase and ClamCase maintain design aesthetics that are most true to notebook styling, featuring an integrated screen holder for the iPad/iPad 2 and a keyboard on the bottom hinged piece. The hinge will allow users to either type with the keyboard, or rotate the hinge all the way around to either serve as a stand for the ipad 2, great for watching videos, or even collapse around to expose the screen for use like a convertible Tablet PC of yore. When closed, the keyboard-case combo will afford the iPad 2 protection for the screen as well. For its versatility, the ClamCase is expected to cost $150 when it launches in June 2011, but you can pre-order today for just $120.

CruxCase™ The iPad’s® New Best Friend from CruxCase on Vimeo. 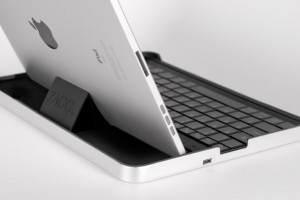 The ZAGGmate is one of my favorite keyboard accessories for the iPad 1 and it is a snap-out cover that protects the iPad’s gorgeous display. What’s hidden under the cover is a keyboard, with actual mechanical, or scissor-cut keys, rather than the membrane-type keys found on competing folio-type case-keyboard combos. The ZAGGmate features a sturdy aluminum design that complements Apple’s industrial design, and will protect the screen when closed. In keyboard mode, an integrated plastic stand pops up to hold your iPad in either portrait or landscape mode so you can have a comfortable make-shift laptop-like experience.

The ZAGGmate could be pre-ordered right now for the iPad 2 for $100 through the makers of the popular Invisible Shield wraps for gadgets.