Madfinger’s Dead Trigger is the game developer’s follow-up to Shadowgun HD, and it looks even better than the previous title.

Dead Trigger looks like a straightforward zombie first-person shooter. Players take their guns to small hordes of zombies as they slowly walk through corridors. Survivors either need to mow down as many zombies as possible to survive or find a cure for the disease.

The studio accompanied the announcement of the game with a shot video that show the difference between generic Android devices and Tegra 3-equipped tablets and smartphones. The results are stunning. The Tegra 3 devices can handle far more environmental effects on screen at once, better lighting, and what looks like higher-resolution textures. The difference is dramatic.

In addition to the added effects, the Tegra 3 also allows for ragdoll animations. That means real-time physics for dead zombies instead of just canned animations.

Dead Trigger will use touchscreen controls like almost every other mobile game. The game will also support controller inputs, which should include the new Nyko PlayPad and PlayPad Pro which come out later this year. Users can connect their tablet to a HDTV with a HMDI cable, and have an almost console-like experience when using a controller. 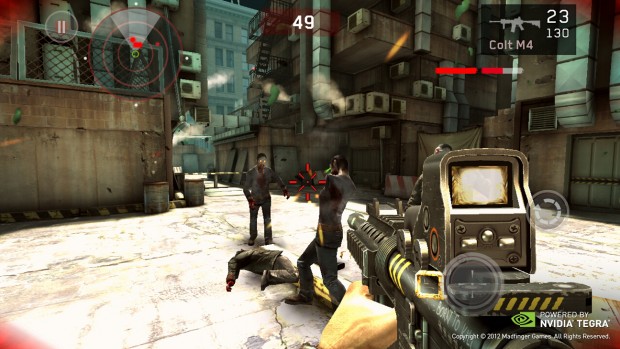 Dead Trigger will arrive in the TegraZone later this year for an unspecified price. For now we’ll just have to deal with the amazing demo video.