Dear Google: Don't Make Me Buy a New Phone or Wait for Ice Cream Sandwich to Enjoy an Android Experience 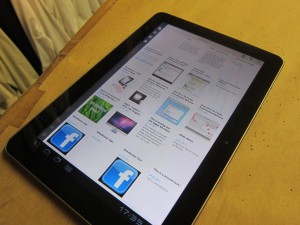 I want to like the Samsung Galaxy Tab 10.1 with Honeycomb 3.1 on it. I really, really do. But in its current form it can only be described as an expense piece of Beta Hardware. Yeah, yeah, I know, many folks are really enjoying Android Tablets. But, you know what, there are many folks who for whatever reason are on diets and enjoy pretending that they aren’t missing out on some good old fashioned artery busting foodstuffs as they watch their friends woof down platefuls of the yummy stuff.

It’s almost unfair of me to compare the Galaxy Tab 10.1 to the iPad 2, because in my view at this point they are just too far apart. So much so that I would think that the International Trade Commission (ITC) would have a hard time substantiating Apple’s claims that Samsung is copying what Apple does and vice when it comes to this device. I’m sure there are underlying IP issues, but from a User Experience issue it’s like comparing a luxury vehicle to a clunker.

Before I get to some specifics, let me say what prompted the headline of this post. I’ve been asking folks who enjoy their Android phones quite a few questions. Some of them have tried Android Tablets but most haven’t. Those I’ve let play around with the Galaxy Tab walk away decidedly unimpressed. I’ve toyed a bit with a few Android phones, but not enough to draw any real conclusions. That said, the consensus in my decidedly unscientific research is that Android (pick your flavor) on a phone is a completely different experience than Android (Honeycomb 3.1) on a Tablet. Let’s see, night and day, black and white, male and female, hot and cold, wet and dry, north and south, you name your opposite and that’s what I’m sensing.

I don’t want to buy an Android phone. Nothing against Android or Android phones, but I have a phone I like very much thank you. I’m not filled with enough gadget lust or OS curiosity to carry multiple contracts at the same time. And besides whatever I buy today will be surpassed tomorrow by something newer in the let’s intro a new Android phone every month game. I note with a wry smile that lots of folks were jumping up and down with glee lately when AT&T announced that any Android phones bought in 2011 would receive the 2.3 (Gingerbread) update. Gee, right about the time everyone will be talking Ice Cream Sandwich. All phones have their issues and benefits, detractors and advocates, but at least with the iPhone I know I won’t be looking at something newer for at least a year. It ain’t much, but it is something.

So, anyway, on to a few specifics.

Form Factor: The widescreen format may be great for watching movies, but it doesn’t fit my style. I like to spend most of my time in portrait mode, and the narrow feel in that orientation just doesn’t work for me. It apparently doesn’t work for Google either because the Android Market Place will only work in landscape mode. And I’m sorry but viewing a webpage in landscape mode on that narrow screen is just not appealing to me.

Apps: No, we won’t get into the numbers game here, even though at launch the HP TouchPad had more Tablet ready Apps available than there were in the Android Marketplace. Even with the promise of better usage of the screen coming down the road with Ice Cream Sandwich, at the moment many Apps that are not Tablet ready (optimized?) look just awful on the Android screen. The wasted screen real estate is just awful. It’s like moving into a new subdivision with large piles of dirt and construction debris just beyond your backyard. No matter how much your grass grows it still looks ugly. An excellent example of this is Evernote. Evernote recently made an update to its Android App and now it looks like a Tablet App. Before, you could get a better visual experience using the web version. Kudos to Evernote by the way, the new Android version looks great.

Even Google’s own new and shiny Google+ App wastes screen real estate horrendously. And, in fact, you can’t do the usual pull down to refresh in new updates in the App the way you can using the HTML version on the iPad or the iPhone. Even the iPhone App version does that. I’m not sure if this behavior is different on Android phones or not. And folks are making noise about wanting an iPad friendly version of Google+. Good luck on that one since Google can’t make one for its own Tablets. Another example is Google Reader. I bet it looks just fine on a phone but on a Tablet, the text heavy approach makes you think that the App designers are afraid of anything visual.

Screen capture: OK, I know not everyone needs a screen capture utility built into the OS, but isn’t that di rigeuer for Tablets and phones these days? The fact that the Galaxy Tab lacks that is just silly. (this is why the pictures for this post look so poor.)

Android Marketplace: Fix the damn thing so you can search for Tablet optimized Apps. For a company built on search you’d think this would be a no-brainer. I bet Google has spent more money processing my returns of Apps once I discover how badly they look on the Galaxy Tab than it has made from the few I’ve kept. No easy discovery of Tablet Apps vs Phone Apps is just laziness.

Screen rotation: I’ve worked with a lot of devices with screen rotation. None have been as sensitive to moving around and thus switching orientation as the Galaxy Tab. It’s enough to make me sea sick. Sure I can lock it down, but then hey, some Apps just want to go only one way. And by the way, why does it take two taps to get to the auto lock for screen rotation? Picking up the Tablet with screen rotation turned on and attempting to do the slide to unlock function is an exercise akin to chasing a fly around a room with a fly-swatter.

Inconsistency in the UI: Although I think this is improving I still find it maddening that controls aren’t the same App to App. If this is what open is, I’m not in favor of it.

WiFi radio: The Galaxy Tab 10.1 WiFi radio does not seem to have the range around my house or office that other devices do. I lose connections frequently. I don’t see this with other devices.

Screen Brightness Control: I like to leave the control for setting screen brightness on Auto and not fiddle with it. The problem with the sensor in the Galaxy Tab is that the screen is constantly dimming and then brightening again at too rapid a pace. I’ve had to turn this feature off and I don’t like that.

Voice Control: One of the reasons I’ve always been envious of Android is the supposed better use of Voice control or commands. Maybe it is a better experience on a phone but on the Galaxy Tab 10.1 I find it woefully lacking.

The Dark on Dark Color Scheme: I know you can customize Android to your heart’s content and for many that’s a turn on. Frankly I stopped playing with screen customization on devices quite some time ago. So to each his/her own here. But something that makes me want to do some customization is the dark on dark color scheme for the control buttons and notifications at the bottom of the screen. The same holds true for the settings screens. Sure in decent light I can read the Home, Back, and Multi-tasking buttons, but notification icons even in good light are almost impossible to discern. In low light it is tough to read anything. I find the same is true of when I am trying to change settings. Who thought this was a good idea?

I’m going to continue to keep working with the Galaxy Tab as my Android experience. Google can’t be proud of what it has here. It’s a mess comparatively speaking. If they are, then woe be unto us. Rating the current crop of Tablets I’m using the iPad 2 is still number 1, the HP TouchPad is number 2. The Galaxy Tab 10.1 with Honeycomb 3.1 is, well, let’s just say I’m surprised it made it to the starting blocks. I know Google is doing some reorganizing. Great, somebody tell Mr. Page that he needs to put some focus on his Android Tablets. Otherwise, quit foisting this kind of poorly done product on us. 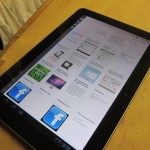 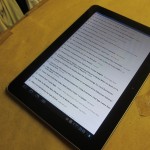 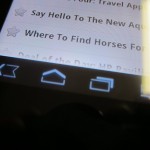 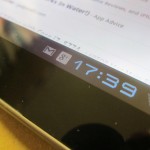 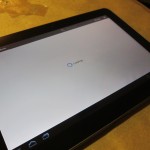 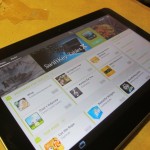 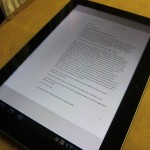