Dell has made two different keyboard accessories available for the Venue 11 Pro tablet, a powered keyboard that adds some weight to the tablet along with a slimmer keyboard cover that’s fashioned in a similar manner to Microsoft’s Type Cover for the Surface tablet. The former is marketed as the Mobile Tablet Keyboard and essentially converts the 10.8-inch slate into an Ultrabook-like form factor while the latter is named the Slim Tablet Keyboard. In  this review, we’ll take a look at the Mobile Tablet Keyboard and we’ll give the Slim keyboard a complete spin in a forthcoming review soon.

The beauty of going with a Windows tablet–rather than an Android slate or iPad–is that you can have a full computing experience. And if you rely on a lot of legacy software, you can use any of your Windows programs or the new Modern UI apps for the Windows 8.1-powered Venue 11 Pro with ease rather than having to find similar substitutes on an iPad. This means you have access to the official Microsoft Office suite, but also to more specialized Office titles as well like Access, InfoPath, and Outlook for Microsoft, along with Adobe’s Creative Suite including Photoshop, Premiere, and Dreamweaver along with being able to surf the Internet to webpages running Adobe Flash and also running programs like the desktop version of iTunes, something that isn’t possible on Android. 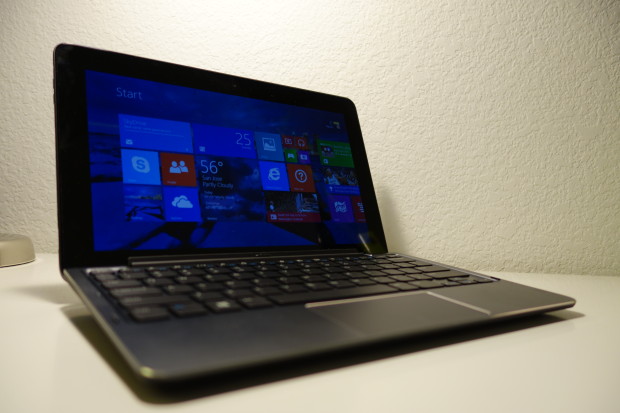 With the Venue 11 Pro’s tablet form factor, you can consume all the content you want in slate form, but when you need to be more productive and crank out a report or generate an Excel spreadsheet, you can attach either the Mobile or Slim Tablet Keyboard options, or use a Bluetooth or USB keyboard for that matter, and have productivity on the go. 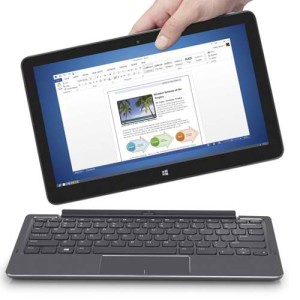 Pros. Solid build quality and attractive design that allows for a comfortable typing experience, converting the 10.8-inch Windows 8.1 Venue 11 Pro into an Ultrabook form factor. The keyboard ships with a battery that essentially doubles the tablet’s battery life while docked, so you can get up to 16 hours of mobile computing on a single charge with the Atom-powered version of the Venue 11 Pro.

Cons. Though the keys were plenty comfortable, touch typists may lament at the ever so slightly smaller key size and spacing. Users will, however, adapt quickly to the spacing so it’s not a major drawback to talk about. That said, the two biggest downsides are that the keyboard lacks a backlight for those who type in dark spaces and the hinge doesn’t tilt back too far resulting in a screen that’s more upright. The keyboard is also heavy as well. 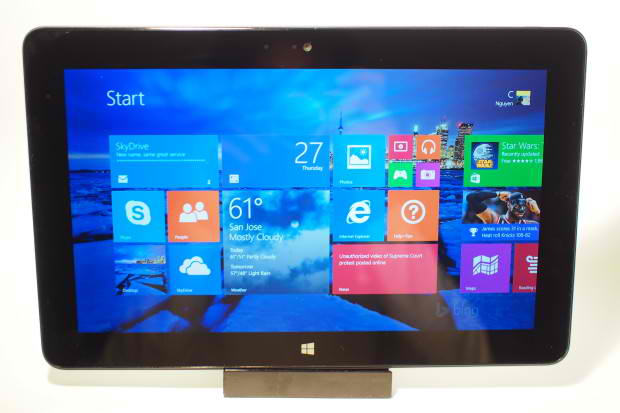 For road warriors, the Mobile Tablet Keyboard is the better option, though it adds extra weight and heft to your gear back. The keyboard weighs 28 ounces and the Venue 11 Pro adds another 1.57 pounds, making the whole package 3.32 pounds, or slightly heavier than the 13.3-inch Dell XPS 13 that we recently reviewed. 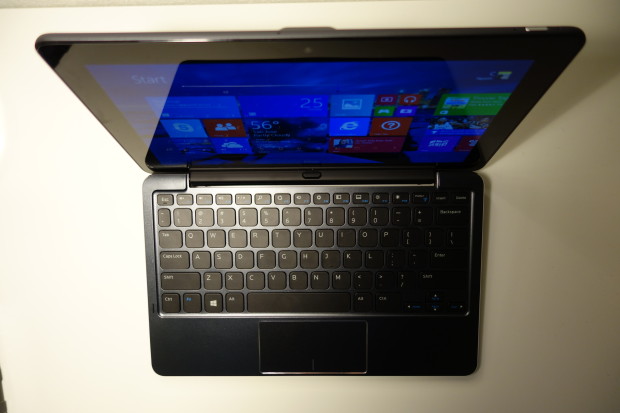 With the tablet docked into the Mobile Tablet Keyboard, users will get a clamshell Ultrabook form factor that’s not dissimilar to Dell’s XPS 13, which we had reviewed earlier, sporting a similar wedge shape that’s slimmer in the front and a little bit thicker in the rear. 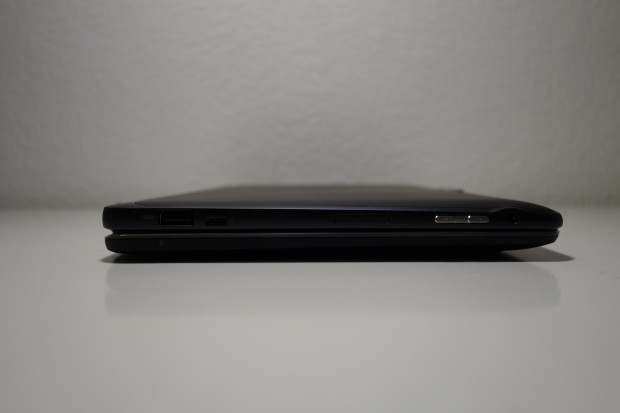 Though thicker than the Slim Tablet Keyboard, the best part about the Mobile Tablet keyboard is that it will double the Venue 11 Pro’s battery life when connected. Given that our Venue 11 Pro (with a quad-core Bay Trail Atom processor and not the beefier Intel Haswell Core) already gets a whopping 8 hours or so of battery life, the keyboard will give you an impressive 16-18 hours of total charge. 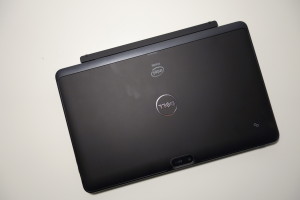 When docked, this means you can use the Venue 11 Pro as an Ultrabook untethered from a power source for two working days. As we didn’t test out how much battery life Dell had managed to squeeze from the more powerful Haswell variant of the Venue 11 Pro, we’re unable to quote battery life there, but combined battery life should double what’s available through the tablet solely.

And like a true notebook, if you’re computer is in sleep mode, and not fully powered off, when the Venue 11 Pro is docked into the Mobile Tablet Keyboard, opening the “Ultrabook” would turn on the display and similarly closing the lid would put the system back into sleep mode.

Keyboard. As a package, the Venue 11 Pro would dock into the Mobile Tablet keyboard on the rear side of the keyboard with a hinge. The hinge itself contains connectors to physically communicate with the tablet, and a small button on the center of the hinge would release the locking mechanism. 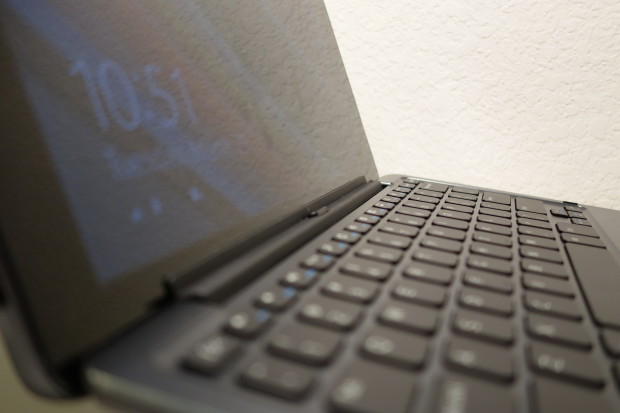 To unlatch the tablet and use it in slate mode, all you would need to do is use one hand to push in on the button and use your other hand to grip and pull the tablet out. Unfortunately, this is a two-handed affair and you would need both hands to be free when trying to release the tablet from its keyboard dock. 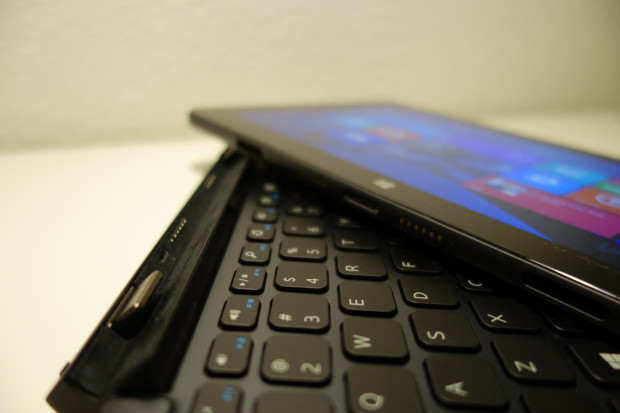 The keyboard deck of the Mobile Tablet Keyboard is set on an aluminum plate, which gives the keyboard a solid feel and helps make the $160 package look premium. When you’re pecking away at the keys, the keyboard doesn’t flex much, but if you do jab hard you’ll notice a little bit of flex towards the center of the keyboard, particularly around the T, Y, G, H, V, and B keys.

The keys are arranged in an island-style layout with black matte keys floating on top of a recessed keyboard bay. The keys are slightly smaller than normal keys on a desktop keyboard, and key spacing is slightly reduced as well, but users should be able to get up to speed quickly with little effort. 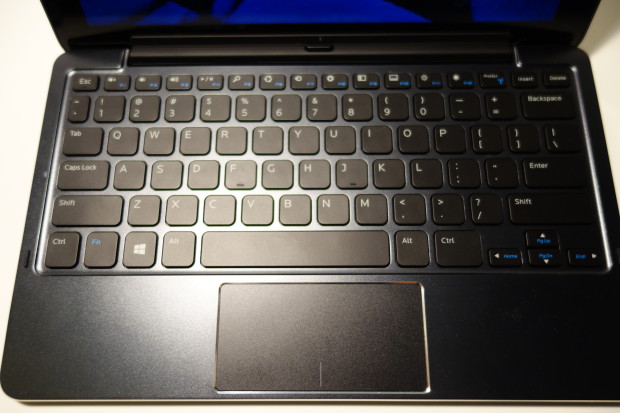 In use, the Mobile Tablet Keyboard offers much more key travel than the Slim Tablet Keyboard, though travel was slightly more shallow than a traditional desktop keyboard. The experience isn’t bad, and is not dissimilar to the HP Spectre 13t x2 keyboard that we reviewed, which ships with a similar convertible configuration albeit with a larger 13-inch screen.

The biggest downside with the Mobile Tablet Keyboard is that it lacks a backlight. Adding a backlighting mechanism would enhance the value of the tablet for mobile office users who find themselves typing in the dark a lot, like in an airplane or a dark boardroom while looking at a PowerPoint presentation. 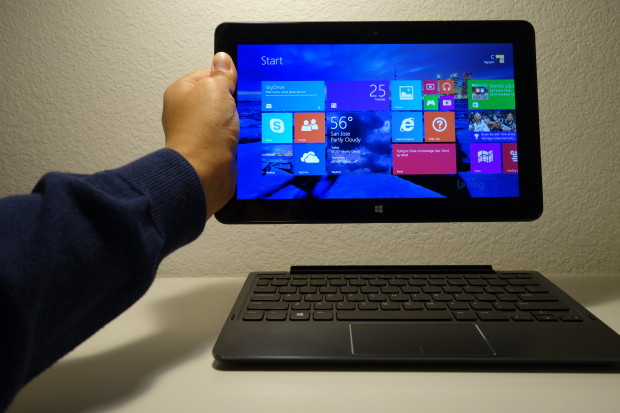 One drawback to the simple design is that when you un-dock the keyboard, you can’t gauge how much battery remains in the keyboard. There are no visual battery LED indicators on the keyboard to alert you to when you need to plug in, though there is a software indicator on the taskbar of Windows 8.1 to show battery life. 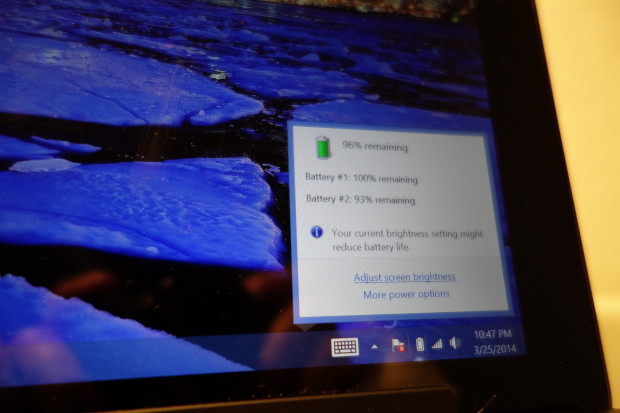 There is also a trackpad as well on the Mobile Tablet Keyboard. The trackpad isn’t large, but is still roomy enough to perform many tasks on Windows 8.1. There aren’t separate left and right buttons on the pad, though if you click on the left or right space, the entire pad will move and simulate a left or right click, similar to what Dell had used on its XPS 13 Ultrabook design. Unlike the XPS 13, though, the trackpad isn’t coated in glass, though a textured finish makes it easy to control scrolling on the small surface. 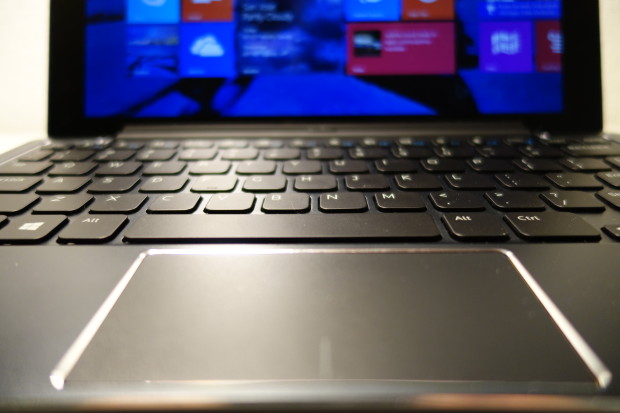 For lap users, like many convertible tablets on the market, most of the weight when docked is placed on the screen–the internal components of the computer are located inside the tablet or display portion–and this means that because of the weight distribution the screen cannot tilt back too far. The Dell Venue 11 Pro when docked into the Mobile Tablet Keyboard isn’t able to go too far past a 90-degree angle so this means that the screen of this Ultrabook form factor will be more upright. Thanks to Dell’s use of an IPS display panel, this isn’t too big of a concern, however, as viewing angles are still good even in this tight angle. 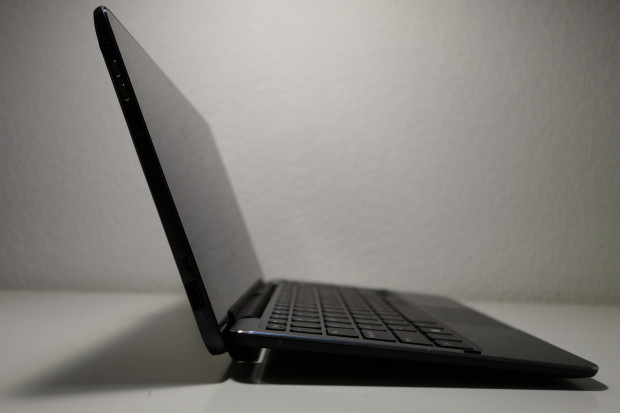 Maximum tilt angle of the tablet when docked to the keyboard. Note that in Ultrabook mode, the screen doesn’t tilt back far at all.

The bottom side of the keyboard is coated in a soft-touch material. This helps the keyboard stay put when you’re using it on a lap. The second benefit to the finish is that it’s more comfortable on cold days to rest the tablet on your lap if you’re wearing a skirt or shorts as the material isn’t as cold as using metal.

Conclusion. The Mobile Tablet Keyboard is a well constructed piece of equipment that extends the value of the Venue 11 Pro, turning the tablet into a full-fledged laptop while at the same time doubling battery life into a commendable 16-hour range. Sitting at a coffee shop, I now no longer have range anxiety, anxiously awaiting an empty wall outlet to recharge when I need to work remotely thanks to the extended battery life.

At $160 MSRP, the Mobile Tablet Keyboard takes on a steep price, especially when you factor in the cost of ownership of the tablet itself. However, for those who need battery power, an uncompromised typing experience in a mobile and elegantly designed package, the Mobile Tablet Keyboard is as a solid accessory option that will allow you to be more productive on the go.