The 8-inch Windows 8 Dell Venue 8 Pro is one of the most well-appointed and affordable 8-inch Windows tablets on the market today with a screen size that’s designed to compete against consumer-grade devices like Apple’s iPad mini and Samsung’s Galaxy Note 8. With that in mind, Dell had committed to building out the tablet’s ecosystem to include a healthy offering of first-party accessories, including cases, keyboards, and a stylus digitizer that works with the slate’s touchscreen. Today, we will be looking at the Dell Venue 8 Pro’s keyboard and see how it performs. 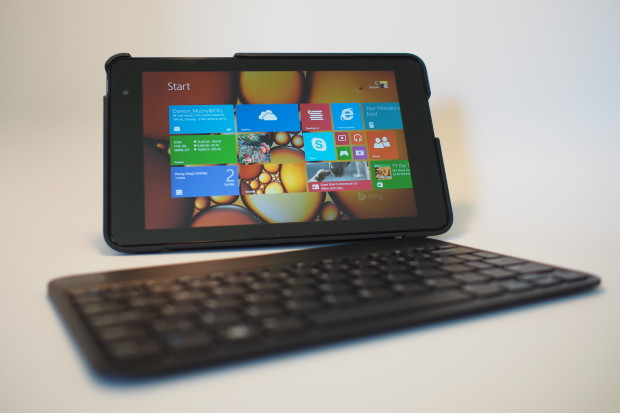 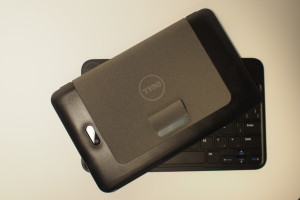 You have a thin slab itself for the physical keyboard, which has 5 rows of normal keys and an additional sixth row of function keys. To compromise on space–the keyboard space is actually smaller than that of a traditional desktop or laptop keyboard, but you do get alpha-numeric keys that are pretty close to full-sized while some of the other keys–tab, shift, caps lock, function, windows, alt, etc–are smaller than normal to accommodate the space constraint of designing a keyboard that fits into the surface area of the Venue 8 Pro’s face. 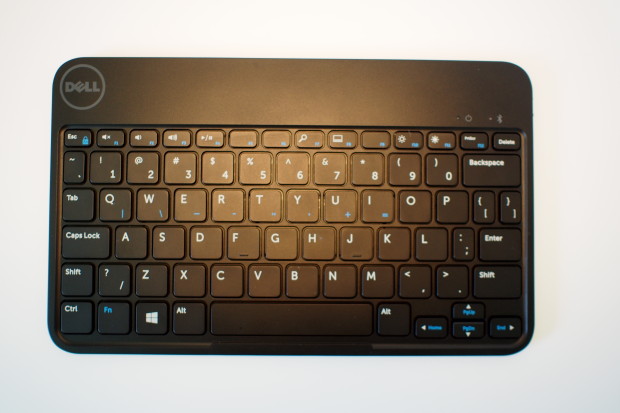 The second piece is actually a cover for the Venue 8 Pro, which does three things. First, the cover, with its polycarbonate back shell design protects the Venue 8 Pro when you’re placing the tablet in a bag for travel. A flip over screen cover, similar to the smart cover on the iPad but without the auto-wake smartness of the competition, protects the display. 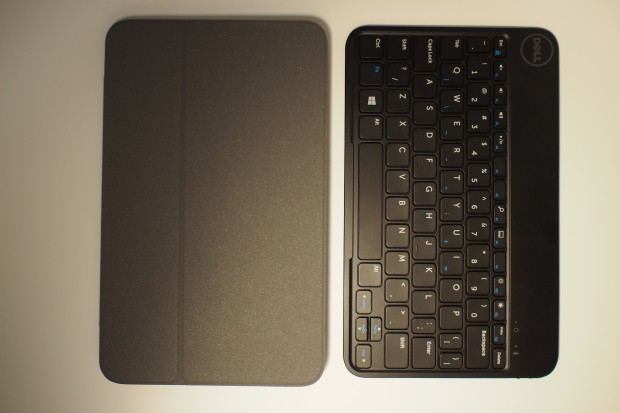 Second, you can fold back the cover piece and insert it into a notch on the back to stand the tablet up. This creates a good viewing angle for watching movies, or if you’re using the case with the Bluetooth keyboard, it will prop up the screen so you can have the keyboard on your desk or lap to type with. 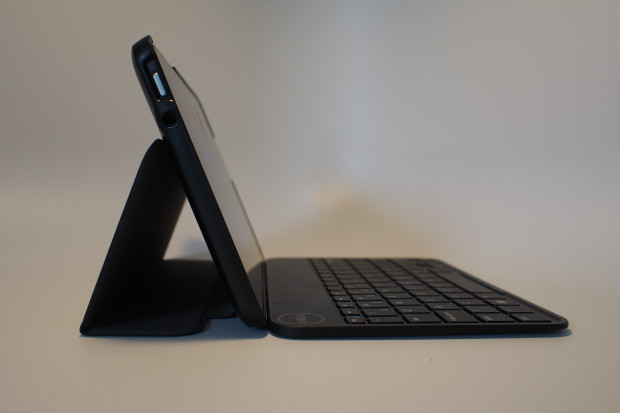 And lastly, a small loop on the back of the case serves as a convenient spot to house the stylus digitizer if you bought this optional accessory. 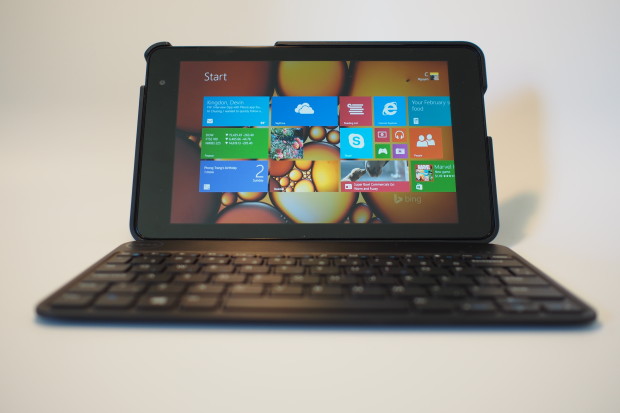 In terms of the typing experience, the keys themselves were comfortable to type on. Spacing in between each keys are reduced and the key size themselves are only a hair smaller than normal keys on a desktop system. This makes for a great typing experience and typists will have little to train their muscle memory to get going at fast speeds on this ultra-portable keyboard. 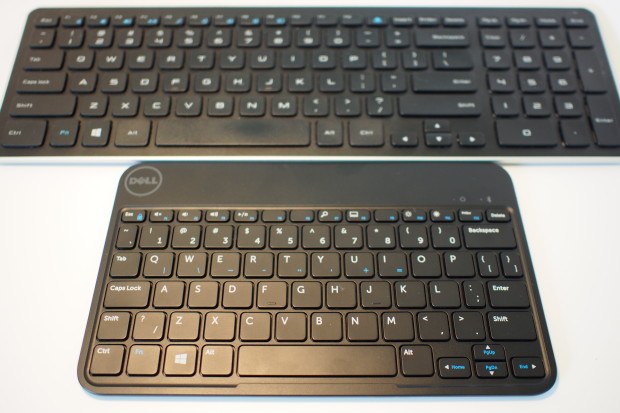 Comparing the Dell Venue 8 Pro’s Bluetooth keyboard accessory to a full-sized Dell wireless keyboard for the XPS 18 system, you can see that the keys are about the same size for the regular alpha-numeric keys, but spacing between keys are slightly reduced to fit in the smaller surface area.

The keys themselves do travel as they are hardware keys, but there is little travel when compared to a full-sized keyboard. Additionally, the keys do make a satisfying clacking noise, but given the portable nature of the Venue 8, this may be distracting if used in a quiet lecture hall or board room. Still, while the shallow key travel may be a concern at first, adjusting to the keyboard takes little time and fast touch typists will be able to get up to speed, or nearly at full speed, using this compact keyboard.

And though the typing experience is greatly enhanced thanks to the addition of this Bluetooth keyboard, there are certain compromises that Dell made in designing this keyboard. 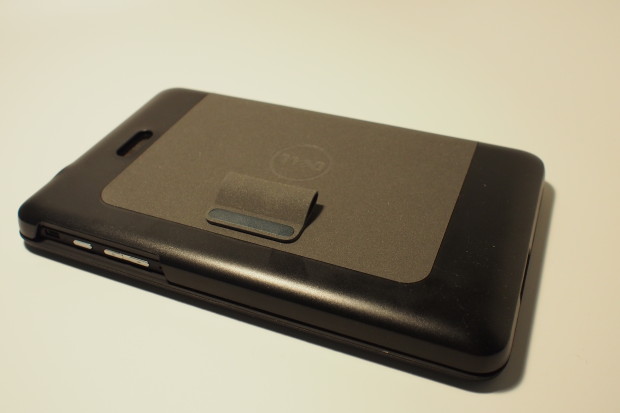 The Dell Venue 8 Pro keyboard magnetically attached to the cover case. The two pieces ship together in this optional accessory package.

First, unlike the ZAGGkeys Cover for the iPad mini and iPad Air made by ZAGG, the Dell keyboard doesn’t offer any backlighting. It’s not a big deal, but it’s a useful feature for those who type in the dark and would prefer some illumination to the keys.

Second, the keyboard doesn’t offer any mouse, trackpoint, or trackpad for navigating Windows. Given that the Windows 8.1 operating system on the Venue 8 Pro supports programs that can operate in the classic desktop mode, having a small trackpad would be useful. Still, those wishing to interact with the slate without having to resort to the touchscreen can do so by attaching a Bluetooth mouse or trackpad to their setup.

The Dell Bluetooth keyboard is a well executed experience that brings another level of versatility to the Dell Venue 8 Pro Windows 8 tablet. It allows users to consume content and have a portable tablet while traveling, but the added keyboard will also allow the same users to be productive, respond to emails, correct Word or Excel documents, and update their calendars without having to rely exclusively on the touchscreen.

And while the keyboard isn’t perfect–it lacks a backlight and a two-piece setup is clunkier than had Dell went with a 1-piece like the ZAGGkeys Cover or even the Dell power keyboard for the larger Dell Venue 11 tablet–it still offers a lot of flexibility to users who prefer to travel in a compact and light package. The keyboard accessory itself gives the Venue 8 Pro an edge over similar sized Windows tablets–like those made from Acer, Lenovo, and Toshiba–as those tablets lack a keyboard that could truly transform the slate computing experience into a miniaturized notebook or netbook.