Dell doesn’t try to deliver a tablet and a notebook Windows 2-in-1 that often leads to sacrifices in key areas. Instead the Dell XPS 13 is an amazing 13-inch notebook in a svelte and stylish package that is smaller than most other 13-inch notebooks.

Windows 8.1 is still a pain point for users thinking of switching from the MacBook Air to the Dell XPS 13, but if you are a Windows user this is the notebook to buy.

Dell is even able to deliver all of this with a starting price of $799 and coupons cut the price of the Dell XPS 13 2015 model even lower. At the top of the line, users double the memory, gain a higher resolution and Intel Core i5 processor, but even at the entry-level the Dell XPS 13 is well ahead of the competition.

The Dell XPS 13 earns a Gotta Be Mobile Editor’s Choice Award for the great build and design, incredible screen and overall value that it delivers for Windows users. 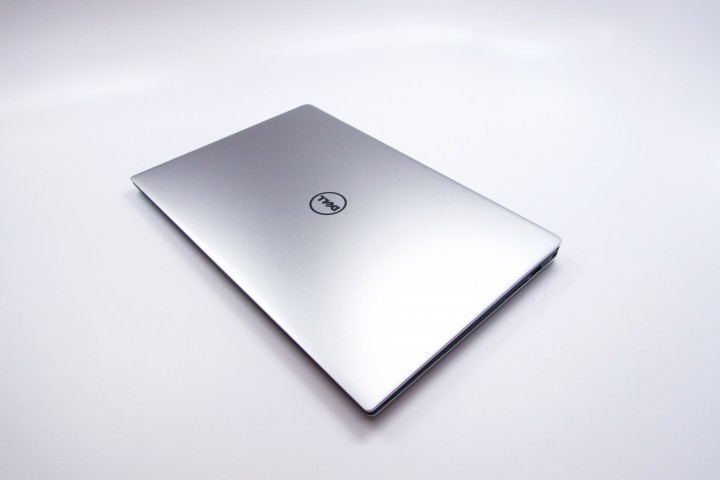 The Dell XPS 13 2015 model is the best Windows notebook you can buy today.

What We Like: Great display, Excellent Design, Great mix of ports and connectivity.

What We Don’t Like: Battery doesn’t live up to promises, Windows 8.1 oddities.

Bottom Line: The Dell XPS 13 with Infinity display is an incredible notebook for Windows users, especially with a $799 starting price. 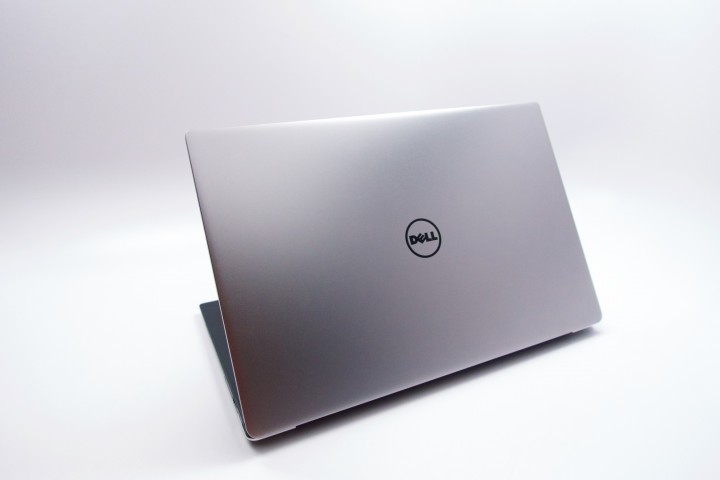 A slim and thin aluminum and carbon fiber design marry to form a beautiful notebook.

The Dell XPS 13 2015 model is incredibly small but it doesn’t cut corners to get to this size. Dell shrunk the bezel of the XPS 13 so small that the camera is now near the hinge instead of up top because there is simply no extra space around the display.

With a smaller bezel Dell is able to keep the overall size of the XPS 13 to about that of an 11-inch notebook, even though there is a 13-inch display tucked inside. This makes for a very portable machine.

The exterior is a durable and great-looking aluminum while the inside is a soft-touch carbon fiber that amps up the look and feel. The carbon fiber palm rest is much nicer than the aluminum on the MacBook Air. The device is 9-15mm thick and weighs 2.6 -2.8 pounds depending upon your configuration.

There is no need to buy a MacBook Air and install Windows just to get a great looking, well-built notebook, Dell delivers a great product with the new XPS 13 with Infinity Display. 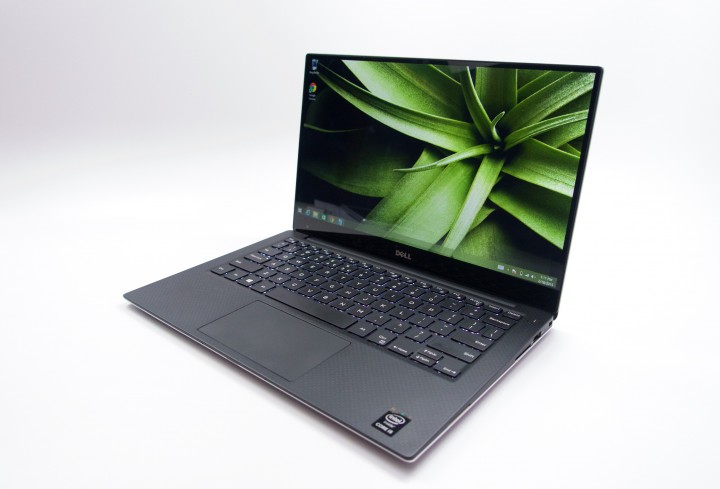 This is an incredibly bright display. We often kept the display at 40-50% and it was just right for extended use. At the 50% brightness level battery life drops from Dell’s claims, but if we stick with a more meager 20% brightness the display is still usable.

The display looks great with vivid colors, deep blacks and whites that are really white instead of the off-white that we often see on cheaper displays. Watching HD videos and surfing the web are a joy on this display.

With almost no bezel the display stretches almost to the edge of the notebook so it is something you will touch, even if it is not the touch enabled option. Thankfully there is Corning Gorilla Glass to prevent scratches. After a month of use in the house and around town there are no scratches or scuffs, but there are a few fingerprints.

The bezel is practically non-existent.

Using touch on the Dell XPS 13 display makes it easy to reach out and move the cursor, switch apps and use the modern design of Windows 8.1, but even without touch this is still an excellent display option.

On some earlier Windows notebooks with huge resolutions the desktop mode was almost impossible to use due to the high-resolution, but that is not an issue at all on this model. 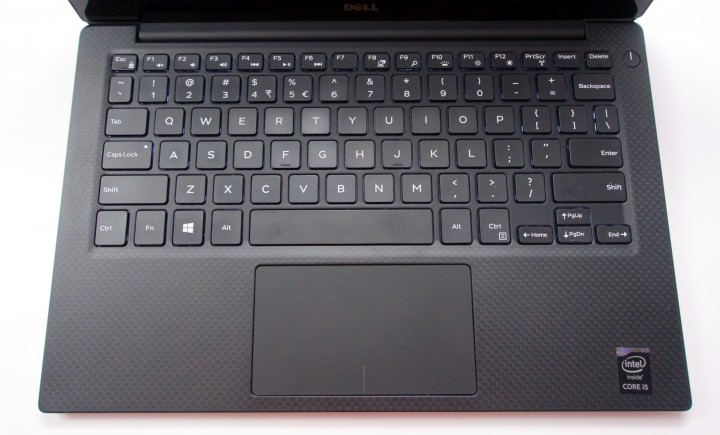 The XPS 13 2015 keyboard is excellent for a small, portable notebook.

Even with a small frame, the Dell XPS 13 keyboard is very good. The island style keys are fairly flat, but they are easy to find without studying the keyboard and the spacing is just right. The key travel, how much the key moves when pressed is good for a very thin notebook, and are springy enough to push a finger back after a press. The Dell XPS 13 2015 keyboard is good enough to handle 4,000 to 5,000 words a day, so it should handle just as well for users who only need to type a few pages a day. The keyboard is backlit, making it easy to use in dim lighting. 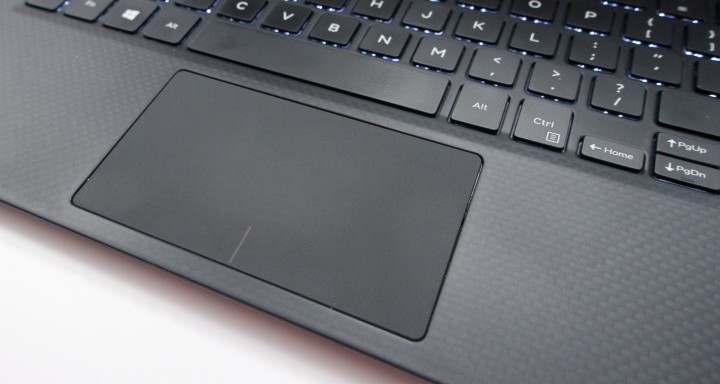 This is a very nice touch pad, especially for a Windows notebook.

Windows Touch pads often fail to stand up to the one in the MacBook Air, but the new technology used makes this touch pad act more like a small touch screen on your phone. It is very responsive to touch or gestures and it is good, but not perfect, at palm rejection. Occasionally scrolling inside of a text box or selection inside of Chrome was problematic, but that appears to be an issue with Chrome rather than a problem with this touch pad.

With the new 5th generation Intel Core i5 and 8GB of RAM in our review model the Dell XPS 13 handled any task we could throw at it. This machine is capable of everything that the average user needs to do online, but it can also edit photos and short videos to share on Facebook or with friends. It is not a dedicated gaming laptop or a movie editing marvel, but it can handle casual needs of the average user and of many business users who don’t need to manage those tasks on a daily basis.

After extended use and many tabs in Chrome open or other power-stressing activities a fan will run, which is loud enough to hear while you work. 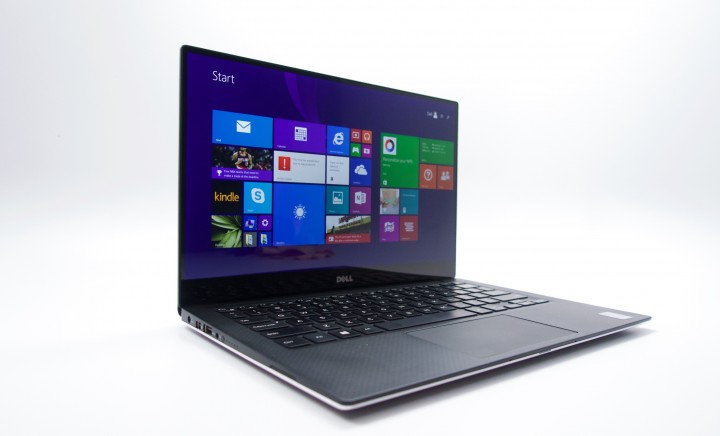 Windows 8.1 is able to get in the way of productivity in some cases.

One of the biggest drawbacks to this notebook is that Windows 8.1 still manages to get in the way of productivity and creativity. Dell can deliver a worthy alternative to the MacBook Air, but until Microsoft is able to use space on the screen better and fix the user experience the MacBook Air with OS X Yosemite is a better option for creative professionals.

The Dell XPS 13 sound is good for such a small notebook and loud enough, but it should not surprise anyone that there is a lack of bass from the built-in speakers.

With the brightness cut to a still usable 20-30% and only a few tabs open in Chrome the battery life is better, stretching out to 7-8 hours. Dell’s standard XPS 13 charger is small and portable with a long cord.

The Dell Power Companion is an $80 accessory that adds a 12,000mAh spare battery to your bag. You can use this to power the XPS 13 and as a Dell XPS 13 charger. This accessory adds about 3-4 hours to our use with the screen at 50% and many webpages open.

It is great to see a SD Card slot on the side of the XPS 13 2015. Many small notebooks dropped this option to save on space, but with it included it is easy to transfer photos from a digital camera. There are two USB 3.0 ports that can keep charging your phone even when the XPS 13 is sleeping. There is a DisplayPort to connect to an external monitor, a headphone jack and a battery life monitor button next to that. There is also a small Kensington Lock option to secure the notebook.

It’s great to see a SD card slot in a small notebook.

There is no LTE option available, but with 802.11 ac WiFi and Bluetooth 4.0 on board to round out the connectivity options most users are taken care of.

For users who need more connectivity, the Dell Adapter adds HDMI, VGA, Ethernet and a USB 2.0 port to the mix. This $60 accessory can travel with you or be the only thing, other than power, that you need to connect in your main office where you use a monitor and other accessories. 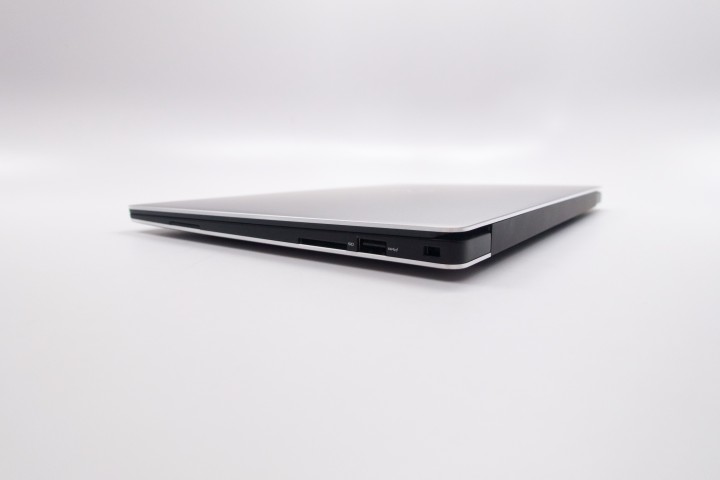 The Dell XPS 13 2015 update addresses many of our complaints about Windows notebooks over the last several years. Dell manages to deliver an incredible value with the entry-level model and a stunning display on the upgraded option.

The overall design and build-quality of the XPS 13 is excellent, and even though the battery life isn’t up to the promise and there are still some usability problems with Windows 8.1, as a whole this is an incredible notebook.