Square Enix’s science fiction series Deus Ex will come to smartphone and tablets this summer with the release of Deus Ex: The Fall.

Deus Ex: The Fall takes place in the same time period of the recent Deus Ex: Human Revolution, but it doesn’t follow the story of Adam Jensen. The Fall follows the story of Ben Saxon, a former British SAS mercenary with augmentations as he tries to uncover a sinister drug conspiracy. Saxon fights against his former employers, the strangely named Tyrants, for his own survival and the survival of all people with augmentations.

Like the console and PC games, Deus Ex: The Fall will let players play through missions using stealth, manipulating NPCs through conversations, computer and system hacking or through straightforward shooting. Players will then have to deal with the consequences of their actions. The game should play differently for gamers who take different approaches.

Also like the PC and console game, Deus Ex: The Fall is a first-person shooter. The game will use touch controls that Square Enix claims are intuitive. With all the abilities Saxon will no doubt have the screen may grow cluttered with icons later in the game. Gamers will have the option to rearrange those icons as they see fit, however, which may make the game a bit easier to control.

While there’s no guarantee gamers will encounter characters from Deus Ex: Human Revolution in The Fall, they will definitely meet characters from the Deus Ex: The Icarus Effect prequel novel. 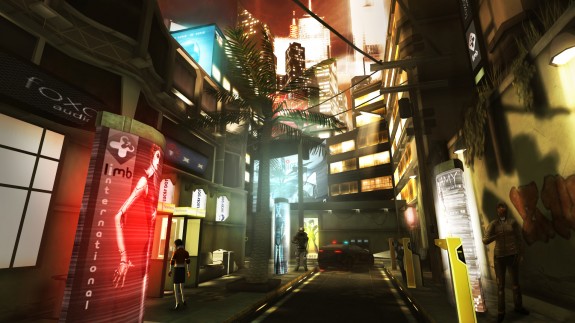 The first part of Deus Ex: The Fall will come to smartphones and tablets this summer for $6.99. That’s relatively inexpensive for a Square Enix mobile game, though the game is likely shorter than the multi-hour epic Final Fantasy games the publisher has in the App Store and Google Play Store.

The video for Deus Ex: The Fall mentions the game will come to iPhone and iPad, though the game may also come to Android sometime as well.

The publisher will show off the game at its E3 booth, and will likely include the game in its E3 booth livestream at some point next week.