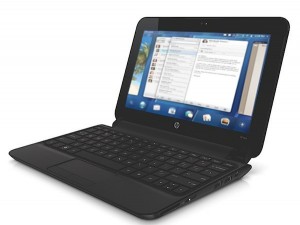 A webOS developer has noticed two un-announced and un-named devices pop up in his developer log files using the webOS operating system from HP, which had acquired Palm.

The first device utilizes the same 1,024 X 768 screen that’s been announced for the HP TouchPad tablet, but will also come with a non-sliding keyboard. Though the log didn’t make mention to what size the display would be, it may be too soon to see a resolution that high be packed into a smaller phone form factor for a webOS smartphone, suggesting that HP may be aiming the device at a netbook or notebook.

HP had previously stated that it would be bringing the mobile operating system to desktops and laptops as well, so this could either be a Windows machine with webOS on it, or it could also be a stand-alone webOS netbook, similar to what Google is doing with its Chrome OS notebooks.

Another possibility for this first machine could also be just a TouchPad connected to hardware keyboard–either via a dock, a wireless Touchstone Dock, or over Bluetooth–as the non-sliding mechanism was ambiguous.

The second device is a keyboard-less handset. A leaked image of such a device had appeared before, and now we know that the device will be running webOS version 3.0, which was initially announced only for the TouchPad tablet, along with a display resolution of 480 X 320. The lower resolution display may mean that HP is targeting this as a mid-tier device.

Neither device is said to pack a removable battery.