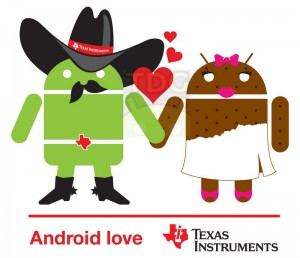 It looks like in an effort to reduce fragmentation, Google may have begun to select reference chipsets to build Android on beginning with NVIDIA’s Tegra 2 for Honeycomb. Rumors were up in the air between Qualcomm’s Snapdragon and Texas Instruments’s OMAP chipset for use in Ice Cream Sandwich, and now if an email that Texas Instruments is sending out is any indication, it seems that TI may have been chosen.

In emails sent out to various blogs, The Droid Guy is reporting that Texas Instruments is emailing a graphic titled ‘Android Love’ depicting the marriage of a cowboy Android robot to Ice Cream Sandwich, as pictured to the right. It’s unclear what the significance of the image is, but it may be due to TI winning the bid to be the reference platform for Google’s next-generation Android Ice Cream Sandwich platform.

If in fact this is true, it would be a huge win for Texas Instruments, which has been a veteran player in the Android camp after having forged a strong relationship with Motorola since the release of the original Motorola Droid 1.

As it seems that all Honeycomb slates released today come with NVIDIA’s Tegra 2 offering, securing the reference design position for Ice Cream Sandwich would be an even greater win for Texas Instruments. As Ice Cream Sandwich is said to bridge the gap between tablets and smartphones and will allow Google to create a ‘universal’ build of Android to cover the two separate mobile lines, Texas Instruments can see its chipsets being adopted in larger ways than NVIDIA’s Tegra 2 as the reference chip design on the next-generation of Android.

Android’s Ice Cream Sandwich will begin to marry the best features of Gingerbread and Honeycomb, and hopefully we’ll see a more continuous user experience between the two mobile computing categories.

At this point, it’s unclear what a win on Ice Cream Sandwich will have on the rumor that Texas Instruments will sell off its ARM-based OMAP chip business. It was reported by SemiAccurate that TI may divest itself from the OMAP business and sell the unit to Advanced Technology Investment Company.