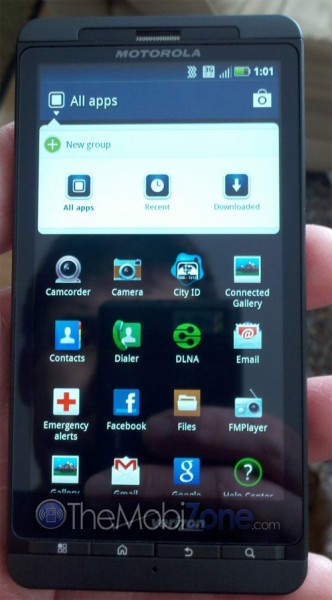 A CDMA-based 3G Motorola smartphone was seen recently at U.S. regulatory agency, the FCC, for approval. As the device lacks 4G LTE support, it rules out the possibility for the Motorola Droid Bionic.

Not a lot of information is revealed via the FCC filing, but if the phone is in fact the Motorola Droid X 2, it is expected to retain a large 4.3-inch display, and may be the new qHD higher resolution screens that will appear on the Droid Bionic as well as on the Motorola Atrix 4G on AT&T, though some have postulated that the Droid X 2 will retain the FWVGA resolution, which is the same resolution found on the current Droid X and is lower than that of the Droid Bionic.

Aside from the lack of 4G support on the Droid X 2, another difference maybe the lack of a laptop dock support, like that found on the Atrix 4G and may be coming post-launch to the Droid Bionic.

It’s unclear if the Droid X 2 will utilize a dual-core processor. For its part, the Verizon Wireless Droid Bionic from Motorola will have a dual-core CPU from Texas Instruments. The original Droid X has a single-core gigahertz CPU also from TI.

The Droid X 2 is expected to have a newer version of the Motorola widgets-based UI, which is similar to MOTO BLUR, for Verizon.