A new set of iPad mini 2 photos show what could be the back of the new iPad mini as rumors of a Retina Display surface and the feasibility of packing a power-hungry display into the same design comes into question.

iPad mini 2 back leaks trace all the way back to February, when we saw what may have been the first glimpse of the new iPad mini. The debate over an iPad mini 2 with a Retina Display is about as old with differing opinions and claims surfacing weekly.

After much back and forth The Wall Street Journal claims an iPad mini 2 with Retina Display is on the way for the holiday shopping season. While this is not an official word from Apple, The Wall Street Journal is reportedly a source Apple often uses to spread a controlled leak. This gives hope that this rumor is correct and Apple is planning to put a high-resolution display into the iPad mini 2. 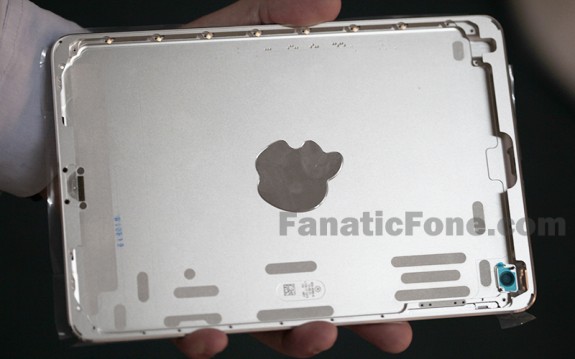 A possible iPad mini 2 back.

Fanticfone shares a gallery of seven photos it claims show the back of the iPad mini 2. These photos look similar in size to the iPad mini on the market today and show off a new look for the Apple logo that sits on the back of every Apple product. Rather than a plastic logo, this case features a molded aluminum Apple logo. This is the same as the purported iPad 5 back leaked by the publication yesterday.

This is an interesting addition as it would likely require a change from Apple to keep radio interference to a minimum. Apple uses the logo as an opening for WiFi and other antennas to operate without interference. Compare the leaked photo to that of the inside of the iPad mini in the photo from iFixit below. 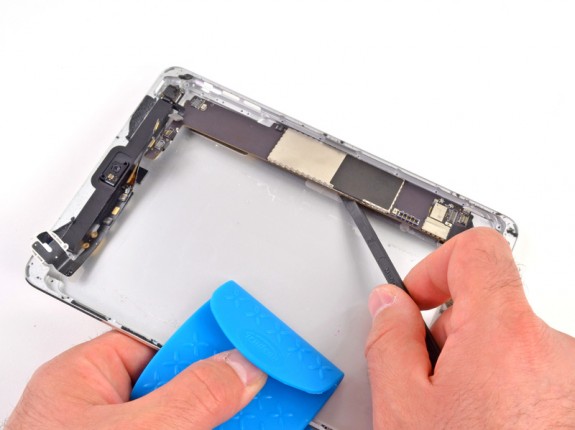 This iPad mini back from iFixit shows a similar size, but no molded metal Apple logo.

This could be a problem as a higher-resolution display uses more power, as we’ve seen on the new Nexus 7, which in our tests doesn’t last quite as long as the previous model with a lower resolution display.

John Gruber of Daring Fireball is well known for spot on commentary about unreleased Apple products, and he outlines the issue Apple faces with trying to put a Retina Display in the iPad mini without changing the design to make it bulkier or heavier and without sacrificing battery life. Gruber sums up what consumers are asking for,

“We demand magic — a retina iPad Mini with no decrease in battery life, but no increase in thickness, weight, or price. And they need to produce at least 20 million of them by Christmas. Something has to give.”

We could see some improvements in efficiency with an Apple A6 processor and possibly better battery life in iOS 7, but it’s clear that Apple faces a challenge in delivering an iPad mini 2 with a Retina Display that reaches past the assembly line.