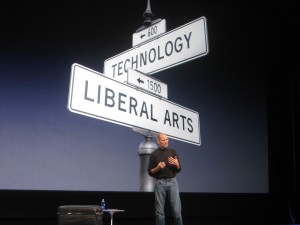 James Kendrick has a nice thought provoking piece up entitled, Who really needs a stinking tablet, anyway? Don’t think JK has gone over the edge. He’s still very much a Tablet lover. But his question has great value. There’s not much we do on Tablets that we can’t do on other devices.

So, why all of this hoo and hah about Tablets? Why do we care? Why do we argue over the differences between platforms like the Hatfields and the McCoys? Why do we wait with baited breath for the next device or OS release and feel such a gut punch when efforts like the TouchPad or Blackberry Playbook fail?

I think it goes back to something emotional that many of us who caught the Tablet bug felt with the original Tablet PCs. Old timers will remember this mantra: Tablet PCs make PCs personal again. Sure the hardware plays a part in this, but beyond a point I’ll get to in a second, the hardware fades in importance compared to what App Developers are able to provide us that allow each Tablet, regardless of platform, to become truly a reflection of our personal desires and needs.

Some folks are happy just to watch some video and surf the web. Some see these tote-able devices as content creation devices as they flit to and fro from gig to gig. Some are happy just to use them to play games. Again, any and all of that can be done with a laptop or ultra-book, and they can be made just as personal, so what’s the big deal?

In my humble opinion, this is where the hardware AND the software mix comes into play. The fact that we are interacting with these devices with our fingers and not through a keyboard is what lifts Tablet hardware into the realm of the personal. The how and why’s of multi-touch with its flicks and swipes, pinches and zooms, scrolling and tapping take the personal to the next and immediately personal level. Quite honestly, I think this is why Tablets based on Android so far have kept stumbling. Google and the manufacturers that rely on Android haven’t conquered the Touch experience just yet.

Ask yourself this. How many times have you allowed someone else to sit down at your desktop or laptop computer in a time crunched situation and been comfortable in the knowledge that they can access and work with what they need to on your device? Do you feel the same about your Tablet? I don’t. This may just be me, but my computers, as personal as they may be, are not as focused a reflection of me as my Tablet. I have a visceral negative reaction when I think of someone else using my Tablet that I don’t have when I allow them to use one of my more traditional computers. Sure, I know that many families share a Tablet. But in the warped world that is my mind, I’m viewing the family’s Tablet as just as personal a reflection of that family as an individual’s Tablet is. What’s on that Tablet defines that family. In years to come it will be interesting to watch how families that share Tablets this way shed Apps and experiences in the same way that toys, games, and other defining attachments get relegated to storage bins.

In the run up to Apple launching the original iPad many, including me, said Apple needed to define what the need for “this middle device” was. I don’t think they were that successful in doing so right away. But thanks to the App developers, we saw that happen in ways that I think surprised even Apple. We continue to see these very personal devices becoming more so. And thanks to Amazon, Barnes & Noble, Samsung, Lenovo, Toshiba, Asus, and other Tablet makers, (even if they don’t call them Tablets), we’re seeing opportunities to have hardware options that can match our very personal visions of how we tote our self-defined digital lives around.

Do we need these devices? Absolutely not. But as human beings, we all look for distinctive ways to define ourselves to each other and more importantly to ourselves. We have been doing that since the dawn of time. As quite a large chunk of the world’s population now defines itself through technology and what it can do for us, it only makes sense that the devices we use to work, play, and access that technology become as personal a reflection of who we are and what we want to portray as our wardrobe or our automobile.

I think I remember somebody somewhere saying something profound about the intersection of technology and the liberal arts.

I think that was right on.