It’s probably not the news many of you Droid 2 Global owners with Android 2.3 were hoping for as it appears that the Gingerbread update will be rolling out this week in a  “soak test” similar to the one that went on with the Droid X before Verizon released the update to the masses. 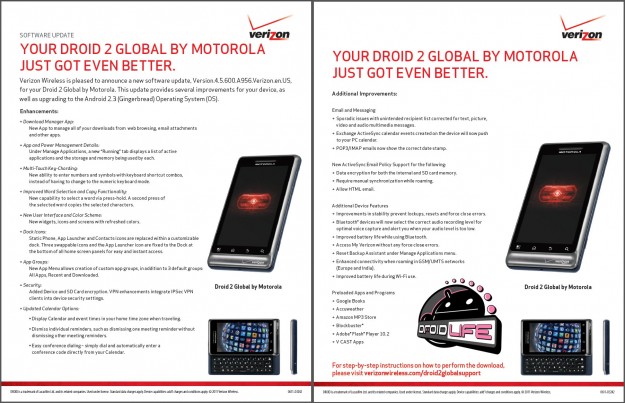 A soak test is just fancy wording for trial run and that appears to be what Verizon will be doing with the Droid 2 Global this week. According to Droid-Life, the update is ready to go and Motorola is apparently inviting owners to take part in testing the software out before it rolls out to everyone.

So, testers will get it this week and if all goes well, the rest of the Droid 2 Global faithful will get it soon after. Verizon also released the change log notes in case you wanted to see what the update was going to be bringing along with it. One of the highlights appears to be better battery life when using the Droid 2 Global in conjunction with Wi-Fi.

A little bit of a bummer that you have to wait a little while longer but the real losers here are owners of the original Droid 2 who appear to be last in line as the Droid X and the Droid Pro have already received their bumps up to Gingerbread.