It’s true: Verizon has fulfilled my worst fear for the Droid – A version of the DROID 2 that everyone will surely call “R2-D2” because it’s actually named after Star Wars’ R2-D2! To quote Darth Vader at the end of Episode III (and please, imagine the exact same voice for this) “NOOOOOOOO!!!1!11!!!ONE!!” 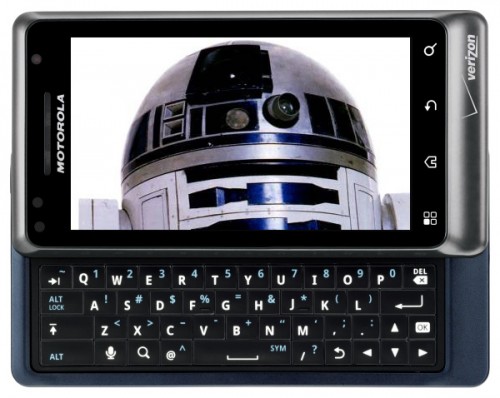 Okay, obviously I’m exaggerating a tad (my actual worst fear involves butterflies and a chainsaw), but yeah, I did kind of call this my worst fear. As some who have known me for a while may recall, years ago, I put together a couple of comedic dialogues that made their way on to the MobileTechRoundup podcast (#28 and #67, respectively), expertly performed by the MoTR Boys. The second of these I described as “My Worst Fear Realized!”

More recently, I did a take on that for the Motorola DROID debut called “What I fear most about Droid“, which basically boiled down to everyone fighting to name their DROID “R2-D2” (with some Samuel L. Jackson para-quotes tossed in for good measure). Just good clean nerd humor at the time, but it seems strangely prophetic today as Verizon has unveiled the new DROID 2, including a special edition R2-D2 version! Yes, an actual, not made-up, DROID that looks (and I’ll bet sounds) like R2-D2! From the press release:

In honor of the iconic Astromech Droid from the Star Wars™ Saga, Verizon Wireless will offer a limited-edition R2-D2 version of the DROID 2, available only online in September. The special version of the phone will feature exclusive Star Wars content and external hardware designed to look like the trusty Droid from the film saga. Visitors to the upcoming Star Wars Celebration V in Orlando, Fla., can see a preview of the limited edition phone and sign up to receive alerts when the phone is ready for sale.

That’s on top of the standard features of the DROID 2, including slide-out keyboard, 3G Mobile HotSpot capabilities, 3.7″ display, 5MP camera, full push corporate e-mail, and the magic of Android 2.2 including Adobe Flash 10.1. Of course, all that is insignificant next to the power of the Force, which you’ll no doubt need if you hope to grab one of the R2-D2 versions. May the Force be with you.