I think we’ve exhausted the pricing and the release date for the Motorola Droid Bionic for today so lets move onto some other stuff that actually might be a little bit more exciting for some of you. Some clear, crisp photos and a pre-launch review from someone who has his hands on a Droid Bionic. The review is from a guy named Joe the Insider on the Android Central forums and he apparently was able to get his hands on one of those demo units that we saw show up earlier today. 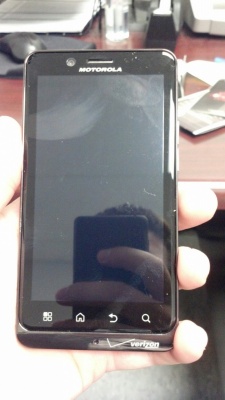 Joe’s quickie review is pretty much all praise for one of the most anticipated phones in a long while and that is probably what those of you who are planning on getting this phone wanted to hear.

This is what he had to say:

Initial thoughts. The phone is extremely light and is actually pretty thin. The battery is 1730 mah and is pretty big. The screen is contoured on the edges, and it comes with a 16GB microSD card. Power button is in a awkward spot though. It’s on the left shoulder of the phone. It’s a pretty big phone as well, its along the lines of the charge.

Start up is ridiculously fast, sound is surprisingly good. The back is plastic like the D3. The camera problem that was widely talked about this the D3 is a NON factor. It boots up right away with no lag. The Pentile screen looks a little different, but to be honest I love the Pentile screen.

The glass on the screen is very nice. It’s hard to explain, but it compliments the actually screen. I want to stress that there is NO redraw. If you’re not familiar with what that is, the D3 has an issue where after closing a app that’s pretty heavy on RAM or it would have to load all apps and widgets on the screen and it would take about 5 secs before it finished and was extremely annoying.

That confirms the talk of a big battery, 1730mAh is pretty good, and it looks like the only complaint he has is that the power button is in a strange spot. Could be a lot worse, huh?  It also appears that the lag that the Droid 3 has, I talked about it in my review, is non-existent on the Droid Bionic. 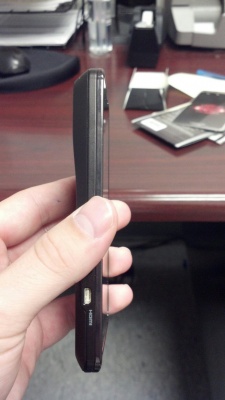 So far so good folks. I especially like the part about thin and ‘extremely’ light.