It appears that HTC hasn’t shut the door on a potential HTC Droid Incredible 2 Android 4.0 Ice Cream Sandwich update,  an update that was originally promised before the end of August but has yet to roll out to owners of the aging device.

Back in 2012, HTC promised that a Droid Incredible 2 Android 4.0 Ice Cream Sandwich update would roll out before the end of August. It made the same promise to HTC ThunderBolt owners. However, HTC ThunderBolt owners finally received their ICS update earlier this year and since then, also received another update aimed at improving the experience. Droid Incredible 2 owners on the other hand remain empty-handed. 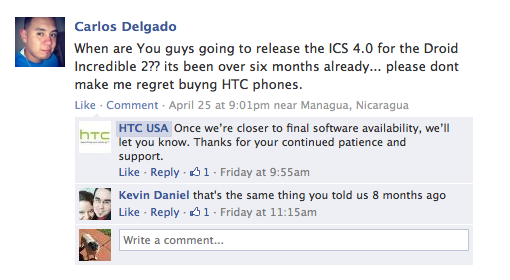 In the past, we’ve heard HTC blame connectivity issues for the delay and we’ve seen it reach out to owners letting them know that it was working on the update and that it would pass along information once it was closer to a release. Of course, official lingo from social media accounts doesn’t always reflect the real situation. We’ve also heard that the Droid Incredible 2 Android 4.0 update is actually in doubt and that it may never roll out to owners.

If that’s the case, HTC still isn’t saying as the company continues to string along Droid Incredible 2 owners, while leaving the door open for the software’s arrival at some point down the road.

HTC has left the door open for a Droid Incredible 2 ICS update.

HTC’s social media team has continued to response to pleading Droid Incredible 2 owners and its most recent responses seem to indicate that the company is still working on the Droid Incredible 2 Ice Cream Sandwich update, eight months after it was supposed to arrive.

The company says that it understands the excitement and that it appreciates owners patience as it works to get the update out, again, eight months after it was initially delayed. It again is saying that it will let owners know about the roll out once it gets closer to availability.

This is a line that the company has put forth since last year though, in light of rumors that say that the update is in limbo, this is about as good as its going to get for Droid Incredible 2 owners.

HTC still hasn’t outright said that the update isn’t coming and it continues to allude to it coming at some point in the future. In the past, we have seen the company come right out and cancel updates so the fact that it’s still saying this to Droid Incredible 2 owners is telling.

What the future holds for Droid Incredible 2 owners isn’t clear and given HTC’s refusal to provide any specifics, it’s impossible to say whether it’s coming soon, if at all. HTC’s statements, however vague, should at least instill a little bit of hope in the remaining owners of this ancient Android device.