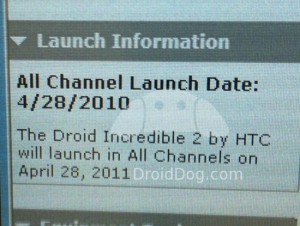 It looks like the Verizon Wireless HTC Droid Incredible 2 Android smartphone will be launching on April 28th, if an anonymous tip to Droid Dog is to be believed. The handset has been leaked numerous times in photos, and a recent pricing leak suggests that the successor to wildly popular original Droid Incredible will be coming soon.

To date, Verizon Wireless still has not announced any information about launch, retail availability, nor pricing. The leaked pricing that was discovered recently suggests that the handset may be priced at $199. Along with the Droid X 2, the Droid Incredible 2 will round up the latest handsets to run on Verizon’s 3G network, though neither device has been officially announced. Verizon’s hedging its Android smartphone bet on next-generation 4G LTE technology, which promises mobile broadband speeds up to 10 times faster than 3G. Those devices include the already launched HTC Thunderbolt, the announced LG Revolution, Motorola Droid Bionic, Samsung Droid Charge, and the un-announced Motorola Droid 3.