Like many of you, we’re pretty excited about the prospects of a 4G LTE enabled Droid Incredible device on Verizon. And like many of you, we’re still waiting for Verizon to give the official word on the device that is believed to be called the HTC Droid Incredible 4G. Until then though, we’re just going to have to settle for leaks and today, we have yet another in the form of a benchmark for the upcoming handset.

The NenaMark score seems to have confirmed a couple of the specifications on board the upcoming Droid Incredible 4G. Benchmarks can be faked, but these match up pretty nicely with what we’ve heard before.

First, it’s going to be running Android 4.0.3 Ice Cream Sandwich. No real surprise there. It also has a qHD 960×540 display of an unknown size, although we’re hoping that it’s the same 4-inch display found on the older Droid Incredible models. 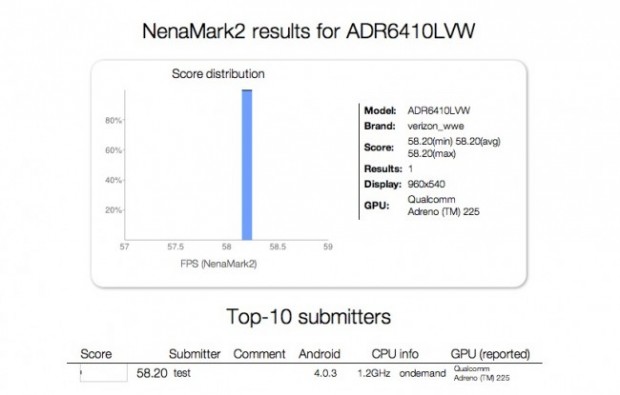 It’s also rocking a dual-core CPU that’s clocked at 1.2GHz and an Adreno 225 GPU which is the same graphics processor found on Qualcomm’s S4 processor. That exact processor is not yet confirmed.

While these are somewhat higher end specifications, we were holding out for something more from HTC and Verizon. That qHD screen just isn’t going to cut it now that phones are rocking 720p displays, phones like HTC’s own HTC Rezound which launched last year.

The Droid Incredible 4G deserves better in our opinion but it looks like HTC and Verizon have other plans.

We fully expect the Droid Incredible 4G to launch this spring, possibly on April 26th, which is a date that showed up in a leaked document just a short time ago.

Are these specs a let down if true?