Verizon Wireless is updating its Droid Does displays inside its stores to feature room for the upcoming launch of the Droid RAZR, which the company says is coming 11/11/11 at 11:11 AM. Live display models are not yet installed, but the new super sleek and super slim flagship 4G LTE smartphone made by Motorola does get a prominent mention prior to its release inside stores. 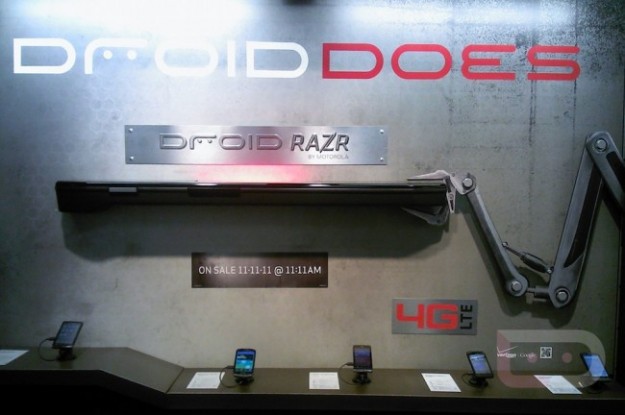 Despite the prominent display for the Droid RAZR, Motorola will be getting some stiff competition as Verizon will also be launching the HTC Rezound shortly after on November 14. That phone features Beats Audio integration and a display that’s capable of rendering 720p HD content pixel for pixel. Also speculated for a November launch is the Galaxy Nexus, which will debut the new Ice Cream Sandwich OS and will also have a similar 720p HD display, but the Galaxy Nexus will utilize an AMOLED panel.

The Droid RAZR will also have support for the Webtop OS and compatibility with new Lapdock accessories that can essentially convert the phone into a light netbook form factor.