Just in time for Valentine’s Day, Verizon is releasing a new pink color for its budget Motorola Droid RAZR M smartphone, a color that will be available in addition to its black and white hues that are already on the market.

The carrier announced today that it will be releasing a pink Droid RAZR M starting tomorrow, a release date that comes just ahead of Valentine’s Day which takes place on February 14th. Pink of course is a color associated with that date and Motorola and Verizon are clearly trying to capitalize on that. 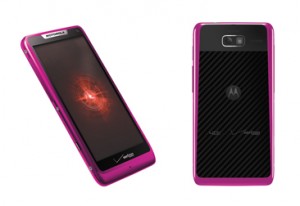 The Droid RAZR M features a 4.3-inch Edge-to-Edge screen with qHD resolution, a 1.5GHz dual-core processor and 1GB of RAM and 8GB of storage. The phone includes an 8MP camera that supports 1080P HD video as well as support for NFC and 4G LTE on Verizon’s massive high-speed network.

Maybe best of all, the Droid RAZR M runs Android 4.1 Jelly Bean out of the box, an update that arrived shortly after the device’s launch in 2012. The update isn’t Google’s latest, Android 4.2 takes that award, but it’s still a fantastic update nonetheless.

The pink Droid RAZR M will also command the same price as the other two Droid RAZR M models and will make itself available, through Verizon, for $99 on-contract after a mail-in rebate.