A short time ago, the Motorola Droid RAZR and Droid RAZR MAXX Android 4.1 Jelly Bean updates started rolling out in to soak testers. Now, Motorola has announced that the updates are officially rolling out to all owners of the devices though the company says that the software will be rolling out in phases meaning it could be several days before some owners see the update.

Earlier today, we learned that the Droid RAZR and Droid RAZR MAXX Jelly Bean updates, which were promised for roll out by the end of March, touched down for those in the soak test. Soak testers ensure that the software is of good quality before it reaches the general public. It usually takes a few days or even weeks before we get an official announcement but Motorola has today announced that the updates will roll out in phases. 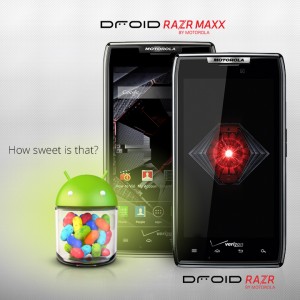 Jelly Bean is officially rolling out to the Droid RAZR and Droid RAZR MAXX.

The update information has appeared at Verizon and Motorola says that the updates are rolling out in phases which means that they will be hitting regular old owners of these devices in the days ahead. The company does not say how long the roll out might take and it could be several days before we see the software start hitting the masses.

Motorola details what owners already knew from the changelog that arrived earlier today. The update will bring about a number of enhancements and features including Google Now, expanded Notifications, a faster user interface, improved stock Google apps like Browser, and more. In addition, the updates should take care of some of the bugs that Droid RAZR and Droid RAZR MAXX owners have been experiencing since updating to Android 4.0 Ice Cream Sandwich in the summer of last year.

Those that aren’t keen on waiting for these features are able to download and install the updates right now though users should proceed with caution. Drodi RAZR and Droid RAZR MAXX owners who aren’t adept at installing software manually should instead wait for the updates to arrive Over-the-Air as it is a much safer, much easier process.