The Motorola DROID Turbo Android 5.1 Lollipop update rumors have been floating around since way back in December of last year, and this afternoon we’re happy to announce it’s finally here and will begin rolling out to all owners starting tomorrow, July 1st.

Currently the Motorola DROID Turbo is running a nearly stock version of Android 4.4 KitKat, and has seen a few updates from Verizon already. For months we’ve been hearing the DROID Turbo Lollipop update is coming soon, and earlier today Motorola teased it was in the testing phase, and now we have all the details.

Android 5.1 Lollipop, the successor to Android 4.4 KitKat, was released in November of last year just a few weeks after Verizon debuted the DROID Turbo. For months the update has been delayed due to Google releasing Android 5.1, then Android 5.1.1 Lollipop, and now after months of waiting it’s finally ready.

Last week we confirmed that Motorola was finally reaching the point where they were ready to push Android 5.1 Lollipop out to the DROID Turbo for millions of owners, and the company started a software soak test for select few users. This is the last round of testing done by real users, members of the Motorola Feedback network, before the official update rolls out by carriers like Verizon.

Motorola’s own David Schuster took a moment to post on Google+ recently and confirmed it was coming soon. Stating the DROID Turbo will be updated straight to Android 5.1 Lollipop, and that testing was almost finished.

Today though, Motorola has officially announced the DROID Turbo Android 5.1 Lollipop update, as well as released a full changelog over at their website. This confirms the testing has been completed, and Verizon is giving the okay to release the latest software.

The link above is a general outline of everything that’s new in Android 5.0 Lollipop, but on top of that there are even more changes in Android 5.1, which is what’s arriving for DROID Turbo owners. The entire look and feel will be completely different thanks to Lollipop. Owners can expect a complete visual overhaul with neat visual effects and animations, a much improved notification pulldown bar, better quick setting controls, improved lockscreen information and much more. Google fixed the memory leak problem, the notification bar is even more advanced in Android 5.1 Lollipop, and Verizon has integrated VoLTE HD voice calling with the DROID Turbo.

According to Droid-Life the Verizon DROID Turbo Android 5.1 Lollipop update will start rolling out to all owners tomorrow, July 1st, but may take up to 5-7 days before all owners see it arrive. As usual owners can wait for the over the air notification, or head into settings > about phone > check for updates and pull the software as soon as possible. 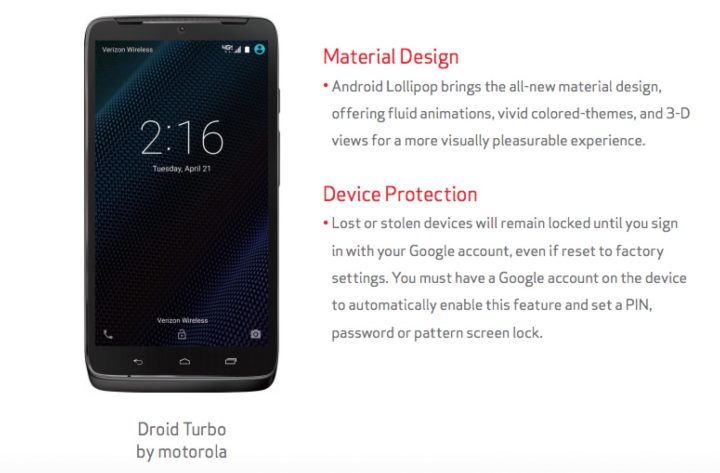 Everything from animations, smart lock, screen pinning, quick launching the camera and more is included. For an idea of what to expect, check out our Moto X Android 5.0 Lollipop review, as they run very similar software.

Again, the Verizon DROID Turbo Android 5.1 Lollipop is finally rolling out starting tomorrow, and it will be a huge file so we’d recommend owners use WiFi to complete the download, and backup their devices prior to updating just in case the software upgrade causes problems. The Android 5.1 update for the DROID Turbo has lots of changes, so stay tuned for more details and let us know if you receive the update tomorrow.