There’s no shortage of great games on the iPad, but the on-screen controls found in most games leave gamers wishing for more.

This fall the DUO Gamer will deliver a wireless iPad controller with joysticks, a D-pad and physical buttons to up the fun of playing games on the iPad.

Discover Bay Games markets the DUO Gamer for the iPad, but it works on any iOS device including the iPhone and iPod Touch. The gamepad and a HDMI cable turns the iPad into a semi portable gaming console. 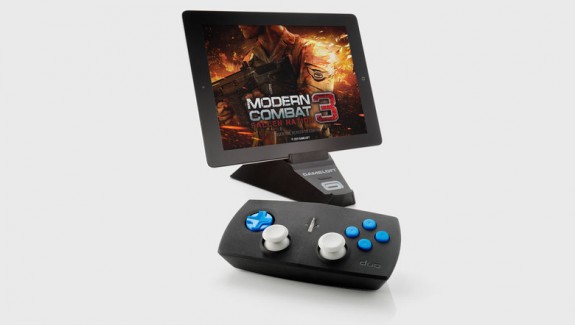 The catch is that the DUO Gamer only works with select Gameloft games. This includes N.O.V.A. 3, Asphalt 7: Heat and Order & Chaos Online to start, with support coming to Modern Combat 3 and Brothers in Arms 2 soon. These are all exciting games, but users can’t play just any game. The DUO Gamer should work with more games in the future, but at the start this is it.

The DUO Gamer is a wireless controller with dual analog sticks, D-Pad with separate buttons and four main buttons on the right that mirror the layout found on Xbox 360 and PS3 controllers. There are two buttons ont he front edge, similar tot he shoulder buttons on most controllers. The controller pairs wirelessly with an iPhone or iPad with Bluetooth and it runs on AA batteries.

For the stand and the wireless controller, gamers must pay $80, and that might be the biggest hitch in this plan. With limited game support, and a $80 price, this is far from an impulse buy.

IGN provides an early hands on with the DUO Gamer, showing off a look at the design and some gameplay, saying that the gameplay is, “great”, comparing the control over gameplay to the Xbox 360.

This is the first iPad, or iOS controller even, that earns Apple’s seal of approval. Apple Stores will sell the controller starting October 5th. Best Buy, Amazon and Target will also sell the DUO Gamer in the near future.